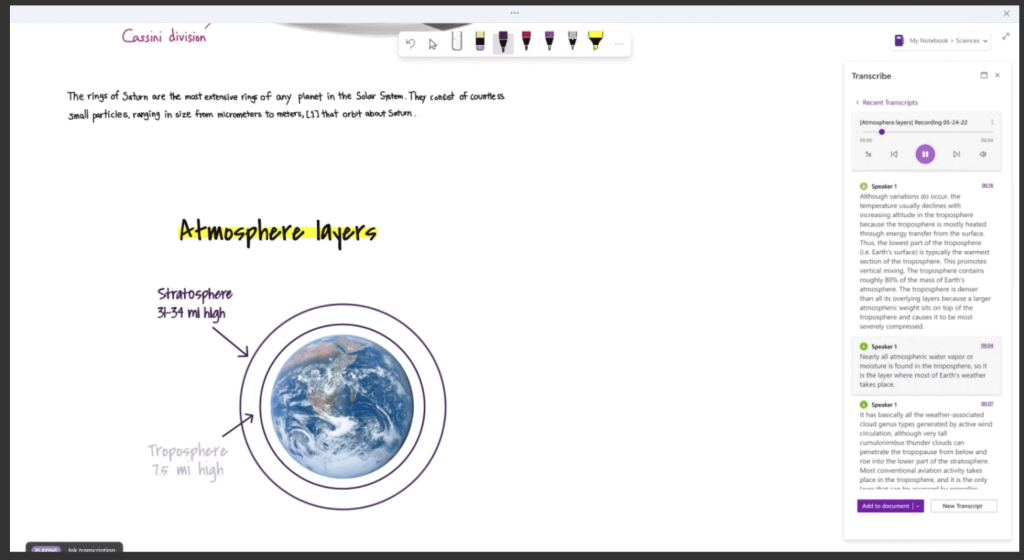 For years, Microsoft OneNote has allowed you to record the audio of a meeting, then take notes, syncing the audio to your inked or typed notes for later review. Now Microsoft is doing that feature one better by adding transcription, too.

Microsoft also unveiled sweeping aesthetic and functional changes that are coming to OneNote, part of a plan to unify the OneNote apps in Windows. Microsoft has said previously that it will begin phasing out the UWP version of the app, also known as OneNote for Windows 10, while adding new features to the version of OneNote that ships with Office.

What’s exciting, however, is that for students (and workers, too) OneNote will soon perform the heavy lifting. Part of the challenge of listening to a lecture is trying to grasp the points being made, while following the argument, while also taking notes as future reminders and teaching aids. Drawing and typing notes are certainly helpful, but they’re distracting, too. What OneNote will do is return to what made it great: record the audio, then transcribe the audio, then sync it to the notes that you took as the lecture took place. Microsoft is also promising the return of “ink replay,” another cool feature that originally surfaced in 2016. Like the transcription, ink replay should, like a movie, allow you to “rewind” your inked notes.

In addition to transcription, you’ll also have the option of dictating notes into OneNote as well, a feature that’s becoming more common across Windows and Office. Microsoft will also be bringing its AI-driven transcription punctuation into OneNote, too, which will help with editing the transcribed text.

OneNote will be pulled into the Windows 11 visual aesthetic, with rounded corners and the Mica look and feel, which will incorporate your Windows theme and wallpaper colors into the app window. Functionally, though, you’ll see other improvements as well: a simplified toolbar, which can afford more space to your content and less to the toolbar; and a small dot that will appear next to OneNote pages with unread changes. It seems likely that these will appear in pages you’ve shared with other collaborators. That’s improved too, with more granular controls over what’s being shared with someone else — individual pages or an entire notebook.

Microsoft promised that you’ll see drawing tools that are more consistent with other Office/Microsoft 365 apps, like Word and PowerPoint. While you’ve always been able to drag photos into a OneNote page, Microsoft is also trying to smooth this experience, so that you can quickly snap a photo with a Surface’s rear camera, for example, and then drop it into a page.

Finally, you’ll also be able to update OneNote in the background, so that you won’t have to wait for more updates to take place before you can begin inking.

Unfortunately, some of the cooler features of OneNote, such as the transcription and ink replay, are “coming soon,” Microsoft explained in a blog post. As someone who works with OneNote regularly, they can’t come soon enough.