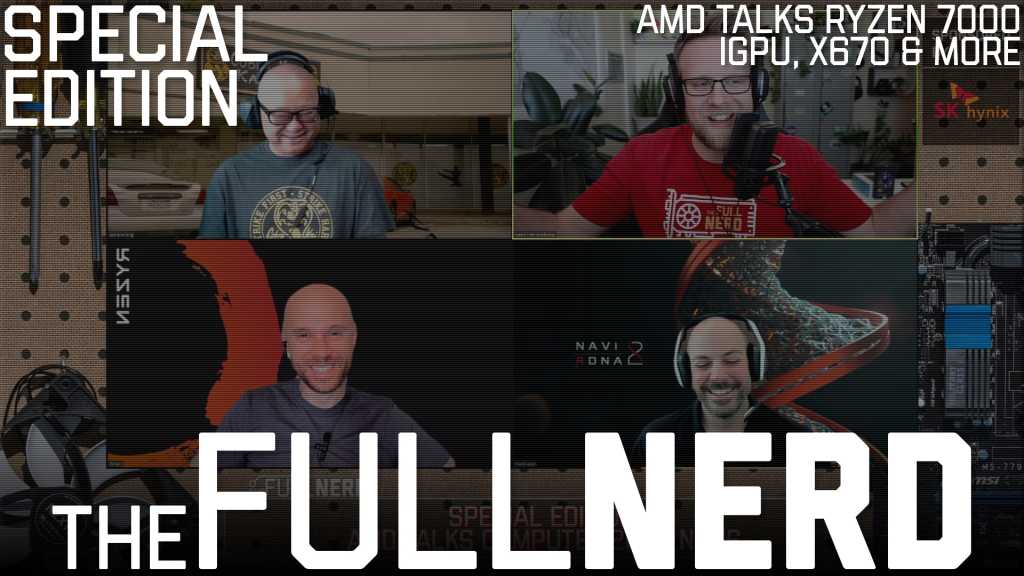 In this special episode of The Full Nerd, Gordon Ung and Adam Patrick Murray are joined by AMD’s Frank Azor and Robert Hallock, who reveal deeper insights about AMD’s new Ryzen 7000 chips, the AM5 motherboards they’ll slot into, low-cost “Menocino” laptops with long-lived endurance, and more.

Did AMD’s eye-opening Computex 2022 demo of Ryzen 7000 running at 5.5GHz use overclocking or extreme cooling? Nope.

That’s the word from Hallock and Azor, who also discuss the impressive demonstration where an upcoming Ryzen 7000 chip was shown outperforming an Intel Core i9-12900K by 31 percent in a multi-threaded Blender benchmark.

The duo explain what to expect of the new integrated Radeon graphics cores in the Ryzen 7000, break down the intricacies around PCIe 5.0 support in upcoming X670E, X670, and B650 motherboards for the AM5 socket, reveal exactly why AMD pumped AM5’s socket power rating up to 170W, and pour cold water on rumors of B650 motherboards not being able to overclock. (Put down your pitchforks, fellow nerds.)

And that’s just the tip of the iceberg in this sprawling, insightful 1.5 hour conversation.

You can witness it all in the video embedded above. You can also watch The Full Nerd episode on YouTube (subscribe to the channel while you’re there!) or listen to it on Megaphone.fm if you prefer the audio alone.

Speaking of audio, you can subscribe to The Full Nerd in iTunes (please leave a review if you enjoy the show). We’re also on Pocket Casts, Google Podcasts, Spotify, or you can point your favorite podcast-savvy RSS reader to: https://feeds.megaphone.fm/IDG8935300959

If you want to wear your geekiness on your sleeve, check out our Full Nerd merch! We just rolled out some new designs so you can proudly proclaim that you’re a friend of the show, or your love of 19×10 gaming. (If you know, you know.)