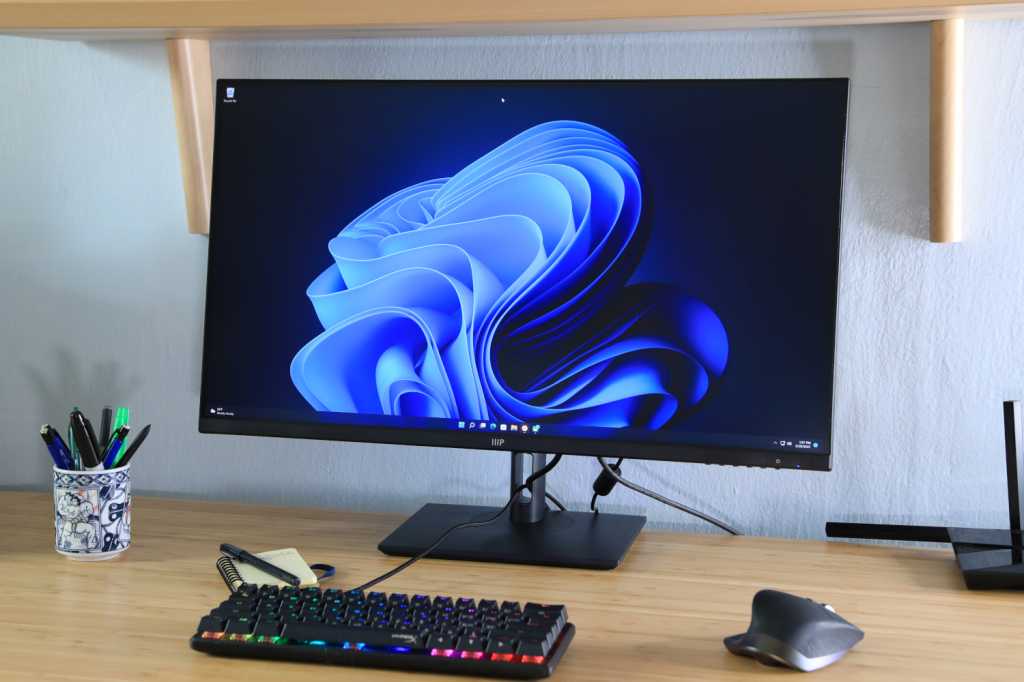 The Monoprice 28-inch CrystalPro costs less than most other 4K monitors and it provides USB-C to boot. Unfortunately, it lacks some of the features you’ll find in competing products that offer more value for the money.

USB-C with Power Delivery is often the best way to connect a laptop to your monitor. The Monoprice 28-inch CrystalPro offers USB-C alongside 4K resolution while also undercutting the competition on price. This makes it an appealing choice, but a few frustrations hold the monitor back.

4K resolution and USB-C video connectivity were premium features a few years ago, but monitors like the Monoprice 28-inch CrystalPro bring them to more affordable price points. Coming in at $359, this 28-inch monitor is sure to appeal to anyone looking for a crisp daily driver.

4K and USB-C aside, however, the monitor’s feature set is slim. It doesn’t offer an enhanced refresh rate or adaptive sync, and while HDR compatible, it isn’t certified to promise a standard level of performance. The CrystalPro is more suited to Word than World of Warcraft.

Most monitors that cross my desk aren’t modern art, but the Monoprice 28-inch CrystalPro is the very definition of basic. Clad in matte-black plastic, the monitor’s single design touch is a tiny Monoprice logo centered on the bottom bezel. It’s the same story around back. The rear panel bears no markings or texture aside from a few vents.

That’s fine. BenQ, Dell, and Samsung monitors are more distinctive, but I doubt anyone shopping for a budget 4K USB-C monitor cares how it looks when turned off. Build quality is a similar story. There’s some creak and flex in the plastics when the monitor is handled but nothing feels fragile or brittle.

The stand is a miss. I like that it can adjust for height, tilt, swivel, and even pivot into landscape mode, but its operation felt grainy and tough. This made fine adjustments to the monitor’s position a chore. A 75x75mm VESA mount is available for adding a third-party stand or monitor arm.

Connectivity is excellent. The Monoprice 28-inch CrystalPro has USB-C with 65 watts of Power Delivery and DisplayPort Alternate Mode. This is great for use with a thin-and-light USB-C laptop, since you can charge and output video over one cable.

Monoprice throws in two HDMI ports and one DisplayPort for a total of four video inputs. That’s a lot for an affordable monitor, and more than Dell’s S2722QC or Samsung’s S80A. 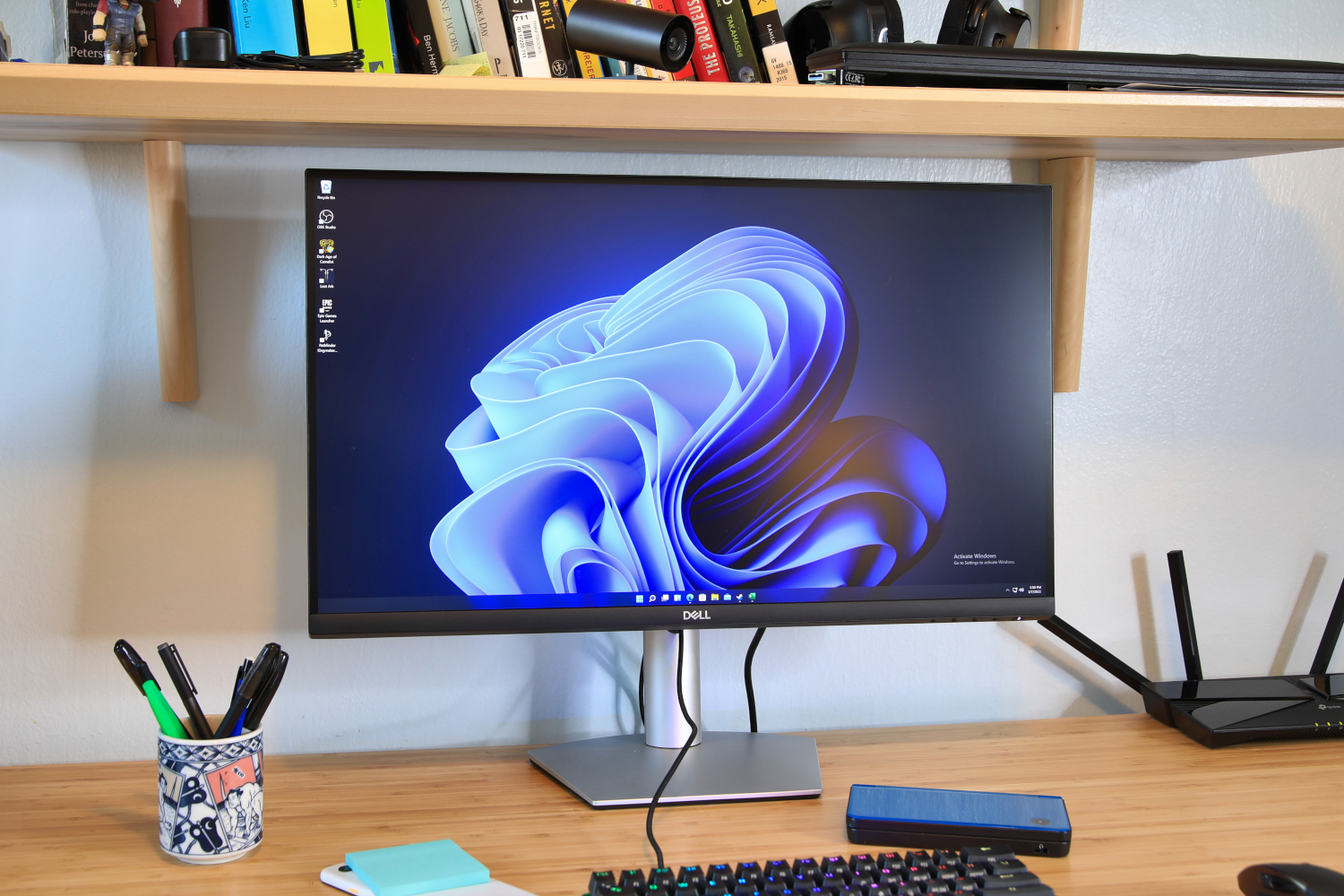 Though it has USB-C, this monitor isn’t a good USB-C hub. It includes two USB-A ports for connected wired peripherals, but they are paired with a USB-B upstream port. The USB-A ports are on the rear panel and awkward to access. There’s no ethernet or DisplayPort-out.

The connectivity can be hard to use in any case because the monitor’s menu system is a disaster. I spent several minutes trying to puzzle it out. It turns out the buttons don’t always work as labeled in the menu. The menu and exit buttons were reversed in some cases.

Putting aside that error, settings are still strangely arranged and poorly labeled. Backing out of any adjustment returns you to the top of the menu tree, not the prior step, which makes every step take just a bit more time. Not that there’s much to adjust. The monitor offers a long list of preset image modes but no precise gamma or color temperature adjustment. RGB color adjustments are available.

Stereo speakers are included. They’re not bad, providing decent quality and volume for general use, but they’re too thin and shallow for entertainment. Most people will want to add external speakers or a headset.

Though affordable for its feature set, the Monoprice 28-inch CrystalPro is not a budget monitor and faces some stiff competition. Many mid-range 4K monitors offer good-to-excellent image quality. The CrystalPro keeps up in most areas.

The monitor’s maximum SDR brightness of 413 nits is nothing to laugh at. This is more than most competing monitors and much higher than Dell’s S2722QC. The CrystalPro is a good choice for use in a bright room.

Contrast is good, with a maximum contrast ratio of 1,150:1. This is about as high as you’ll find in any IPS panel monitor with an edge-lit LED backlight.

The CrystalPro looks clear and contrast-rich in a bright room and when displaying bright content but can look hazy in dark scenes. This is due to poor black-level performance. Areas of a scene that should be entirely lacking light instead show a dull, gray glow.

Most of the CrystalPro’s competitors effectively match it in contrast ratio, though Dell’s S2722QC notably underperformed when in SDR.

The CrystalPro can display only 98 percent of the sRGB color gamut, along with 86 percent of DCI-P3. This is an unusual result, as the majority of mid-range 4K monitors can display the full sRGB gamut (or very, very close to it).

However, the CrystalPro’s coverage of DCI-P3 is just as high as more expensive competitors like the Asus ProArt PA279CV, so the somewhat narrow color gamut is not obvious.

Technically, it means you could miss out on colors other displays can show, but this isn’t a concern in day-to-day use. If you’re a content creator, however, it might be a problem.

This is not a wide color gamut monitor, so the CrystalPro can’t display as many colors overall as some more expensive alternatives. The Samsung S80A is the standout in this category with a punchy, saturated look that leaps off the screen.

Color accuracy is good with an average color error of 1.31. This is not the best available but it comes close to the Asus ProArt PA279CV, which is sold specifically for demanding creators. Default color temperature was 6200K, reasonably close to my target of 6500K.

The CrystalPro’s gamma could be better, however. I measured a gamma curve of 2.3 and, to my eyes, it’s close to veering into a result of 2.4. This means the monitor’s image is often darker than intended.

This is a 28-inch 4K monitor, which works out to a pixel density of about 160 pixels per inch. That’s excellent for an external monitor and provides superb sharpness. Fonts are crisp, high-resolution video is tack-sharp, and games show excellent detail.

The Monoprice 28-inch CrystalPro looks best when you don’t look at it too closely. It is generally crisp, bright, and vivid, but it does have limitations in color gamut and gamma performance. The CrystalPro is good for everyday use, entertainment, and gaming, but not ideal for demanding users like photographers or video editors.

The Monoprice 28-inch CrystalPro has official HDR support, though, unlike many competitors, it does not have a VESA DisplayHDR certification. It’s instead sold as “HDR compatible.”

That is an accurate label. The CrystalPro will display an HDR signal but doesn’t do much to enhance it. Brightness is barely higher in HDR, at a sustained maximum of 443 nits. Color gamut and accuracy fall right in line with the SDR figures.

There are significant tone-mapping issues when HDR is on. Ramping up HDR brightness in Windows 11 destroys detail in lighter shades of gray. If an Excel spreadsheet is open, for example, the borders between cells become invisible. This is a common problem in less-capable HDR monitors.

The monitor also failed to detect an HDR signal and turn on HDR mode automatically. I had to turn it on and off manually.

Motion clarity is fine for a 60Hz display. Ghosting is obvious behind fast-moving objects. Panning across a scene in a game creates blur, but large objects remain legible. Clarity won’t be an issue unless you want to play fast, competitive games—and if that’s the case, a 1080p 240Hz monitor is a much better choice.

The Monoprice 28-inch CrystalPro monitor is among the least-expensive 4K USB-C monitors available with 65 watts of Power Delivery. That’s good news for budget buyers who want that useful feature. The CrystalPro has flaws, including a frustrating menu system and barely-there HDR, but it also has perks, like a solid contrast ratio and great color accuracy.

Still, the CrystalPro is hard to recommend. Like Dell’s S2722QC, another affordable 4K USB-C display, the CrystalPro’s price is too close to superior monitors. Samsung’s S80A offers far better image quality for $40 more. Or if you just want 4K, and don’t care about USB-C, Dell’s aging S2721QS is better value.