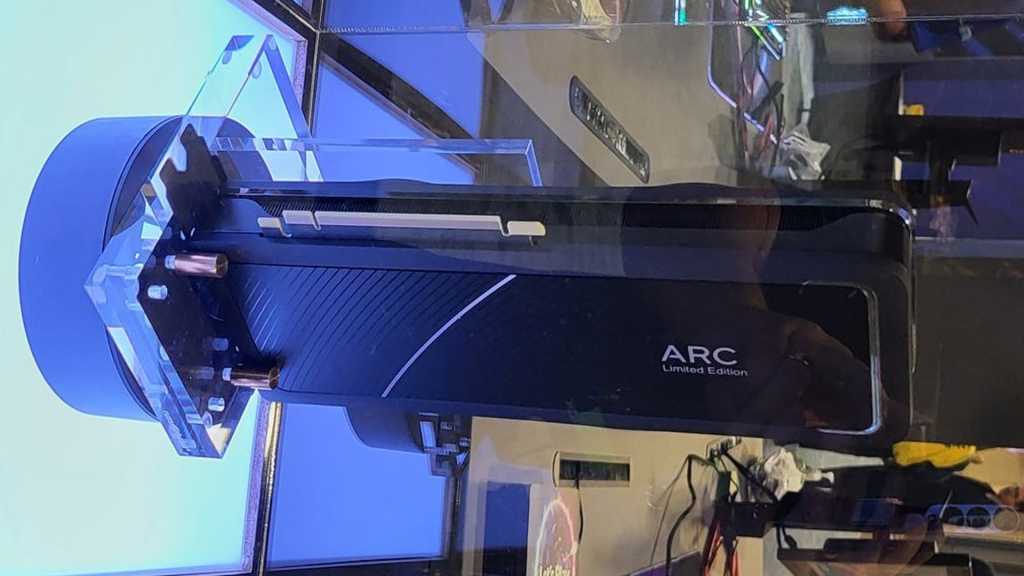 The PC world (and also PCWorld) is agog to get its hands on Intel’s incoming Arc desktop GPUs. As the first brand to step up to the Nvidia-AMD duopoly in decades, it has the potential to create a major market shift. But those GPUs are taking their sweet time to get here with more powerful variants not expected to reach the market until the second half of the year. If you happened to be at a gaming tournament in Dallas, Texas this weekend, you could have gotten a surprise look at the new hardware.

At Intel’s Extreme Master pro gaming tournament, an apparently final version of an Arc GPU was shown behind glass. Though a specific model number for the card wasn’t listed, it was purported to use 32 graphics cores and 16GB of GDDR6 memory, putting it roughly on par with the RX 6800 XT and the RTX 3070 Ti. It sported dual fans and four DisplayPort outputs plus one HDMI port.

The display model was photographed by Intel ARC Community Advocate @theBryceIsRt, whose Twitter post was spotted by TechSpot.

While we’ve had a pretty decent look at Intel’s discrete laptop GPUs, the desktop series remains tantalizingly out of reach. Low-end Arc A3 models are scheduled to debut in China later this summer with more powerful A5 and A7 cards shipping out to international OEMs and (eventually) end-users in the latter half of 2022.

With the desktop GPU market finally reaching sane levels of supply and pricing, it looks like Intel has missed a golden opportunity to enter the market. But that’s hardly a surprise: it’s dealing with the same chip shortages and COVID labor issues as every other company.