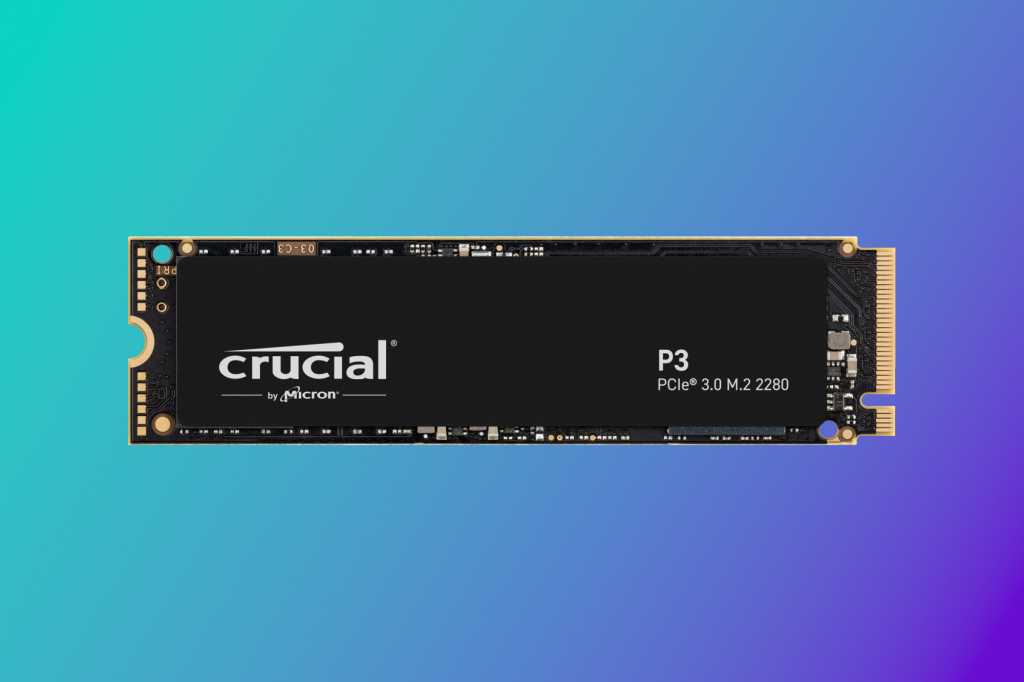 Image: Crucial
At a glance

Though not a top-tier PCIe 4 performer, the P3 Plus is fast in the real world and we can’t argue with 4TB for $400, despite disturbingly low TBW ratings.

Crucial’s P3 Plus didn’t set our testbed ablaze with its performance, but it’s still an NVMe drive, meaning it’s still stupid-fast in the grand scheme of storage things. Plus, what it lacks in performance, it makes up for in price. The 4TB version is only $400, or about half of what a top-tier NVMe SSD of that capacity costs.

Crucial P3 Plus: Design and features

The P3 Plus is a DRAM-less design that takes advantage of NVMe’s HMB (Host Memory Buffer) feature to utilize a small portion of your computer’s memory for caching. That effectively caps performance, but as I said, even a slower NVMe SSD is extremely fast.

Again, there’s no DRAM cache and secondary caching is writing the QLC as SLC (Single-Level Cell/1-bit). The Phison controller will utilize up to 20 percent of the free NAND for that purpose. As to form factor, the P3 Plus is a standard 2280 (22x80mm), PCIe 4 x4 NVMe SSD.

Alas, Crucial exhibits a startling lack of faith in the P3 Plus if you go by the TBW (terabytes to be written) ratings: 110TBW on the 500GB, 220TBW on the 1TB, 440TBW for the 2TB, and 800TBW on the 4TB. These are the limit on the five-year “limited” warranty. Crucial’s TBWs have historically run towards the lean side, but these are around one-third of the norm.

The odds are you can write 10 times these ratings, or more, but Crucial’s policy makes you wonder.

On synthetic benchmarks, the P3 Plus was the slowest NVMe SSD we’ve tested on our new testbed. Happily, in our real-world tests and copies, it was far better. You can see the P3 Plus’s deficit in CrystalDiskMark 8’s sequential throughput test.

Crucial informed me that they achieved the higher numbers you see on the company’s website with smaller data sets. We test with CDM8’s 64GB data set.

Random performance wasn’t a whole lot better, though the P3 Plus did better than the SK Hynix P41 in random reading.

Total all the results and the story is the same: The P3 Plus is a slower SSD. Notice we said slower, not slow.

Where things picked up was in our real-world transfer tests. Windows itself tends to be a mitigating factor in these copies, and will be until Direct Storage arrives on the scene.

Our 450GB write test turned out a nice result. With 2TB to play with, there was plenty of NAND to use as secondary cache. However, once you exceed this, write speeds will plummet due to the relatively slow write performance of QLC NAND.

So the P3 Plus is no barn burner among NVMe SSDs. It still seeks 10 times faster than SATA SSDs, and reads and writes dozens of times faster than any hard drive. It’s fast—it’s just not as fast as others in the benchmarks.

If you want a lot of NVMe storage for not a lot of money (relatively speaking), then currently, the Crucial P3 Plus is what you’re looking for. The performance won’t be fantastic all the time, but again, this is NVMe, and unless you really stress the drive to the point where it runs out of secondary cache, you’ll likely never notice. It’s a real bargain.