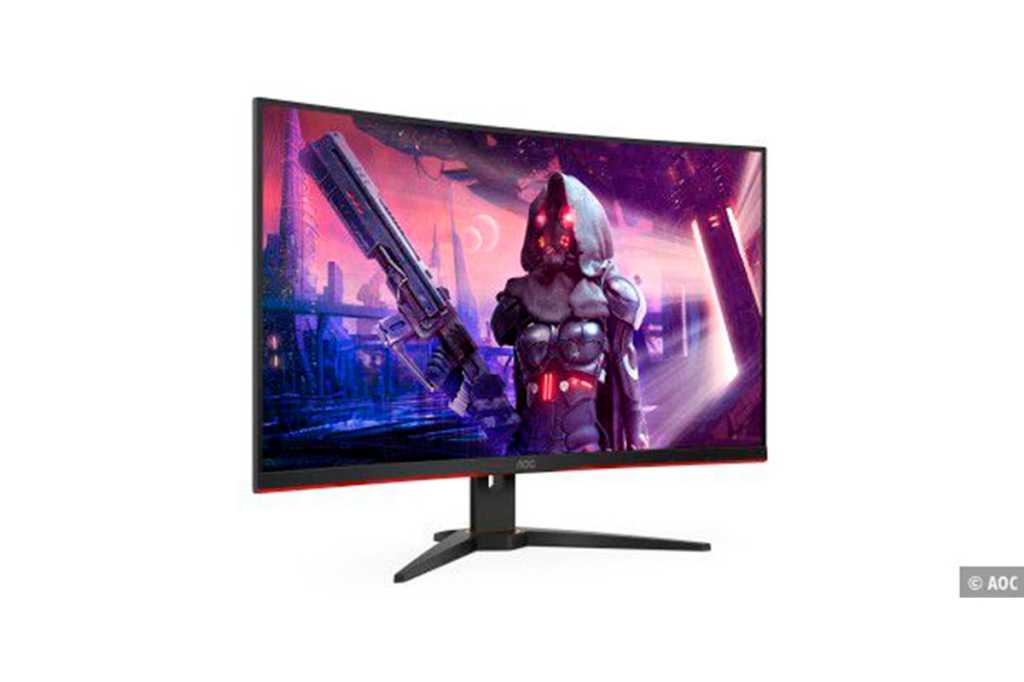 Overall, the AOC CQ32G2SE is an appealing gaming monitor with good performance. However, for the relatively low price, you’ll have to deal with some limitations. Ergonomic adjustment options are missing, and brightness levels are limited. Additionally, the power consumption of the 32-inch model is pretty high.

The Samsung Odyssey is a reasonably priced monitor that has a 31.5-inch curved screen with a native resolution of 2560×1440 and a stunning radius of 1000R, which makes it exceptional for gaming. Read on for more details.

The screen is based on a VA panel with a fast response time of 1 millisecond. The monitor synchronizes with AMD graphics cards via FreeSync Premium, thus the sync technology delivers a refresh rate of at least 120Hz, up to a maximum of 165Hz with its DisplayPort interface.

Note: This review is part of our ongoing roundup of the best gaming monitors. Go there to learn about competing products, what to look for in a gaming monitor, and buying recommendations.

The monitor’s curvature is a narrow 1500 millimeters in radius, which supports a more immersive gaming experience. AOC forgoes the use of integrated LED light strips in the design to keep the price low—a few red flourishes at the base and the back of the casing are the extent of its bling.

The AOC CQ32G2SE’s VA panel supports up to 90 percent of the RGB color range essential for gaming, while other current gaming monitors are capable of up to 100 percent. The picture quality is average, while the brightness falls short of the best values. Still the gaming monitor delivers a very even brightness distribution over the entire screen and has very strong contrast.

In our gaming test, however, the AOC CQ32G2SE was quite impressive. The fast VA panel doesn’t show any noticeable input latency in faster games and manages a flawless display without screen tearing or other image flaws, even at higher frame rates.

The AOC CQ32G2SE is limited to two HDMI inputs and one DisplayPort interface. It also features a headphone jack, but no USB ports. There are two integrated stereo speakers, but they only deliver a thin sound with too little bass. At least one HDMI and DisplayPort cable each are included in the package.

The biggest drawback of this gaming monitor is the lack of ergonomic adjustment options. The curved screen can neither be adjusted in height nor rotated on its base. It can only be tilted forward and backward.

The on-screen menu has a decent layout and offers some gaming-specific features. It has six selectable gaming modes and presets. However, using the five buttons on the lower right panel edge is anything but comfortable. The buttons are not raised in the case and are also too small to use easily.

The AOC CQ32G2SE draws around 45 watts of power from the socket at maximum brightness—this is relatively high and therefore earns the gaming monitor a “C” on the energy label. In contrast, the consumption is very low in standby mode, at 0.3 watts.

Should you buy the AOC CQ32G2SE?

The AOC CQ32G2SE has some issues, but there are also several redeeming qualities. While the sound and power consumption leave much to be desired, the monitor is still decent for some quality gaming time. The 1440p resolution is good and the 165Hz refresh rate is above average. Despite everything though, what we really missed were the adjustment options of this 31-inch monitor. Overall, it should give you good gaming and decent overall performance.