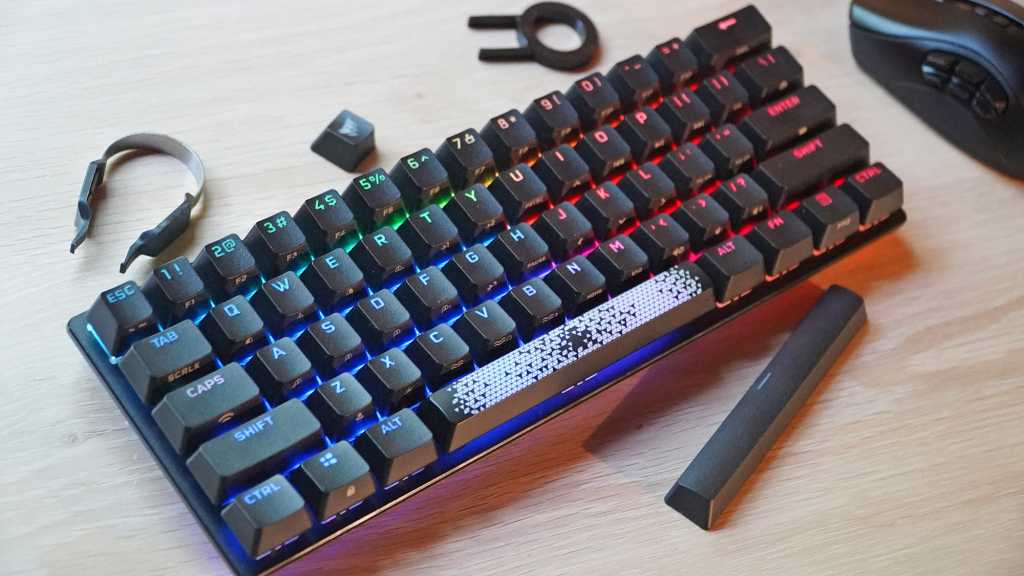 If you simply must have (almost) every possible feature in a 60 percent wireless mechanical gaming keyboard, this is for you. But layout limitations and a sky-high price tag keep this board from getting a more full-throated recommendation.

In the last couple of years it seems like every PC gaming accessory maker has tried its hand at a 60 percent mechanical board, sometimes more than once. They see keyboard enthusiasts dropping hundreds on semi-custom bespoke builds and want a piece of the pie. But I’ve yet to see one of these compact keyboards come out as an unqualified success.

The Corsair K70 RGB Pro Mini Wireless is the latest entry. It’s technically almost flawless, packed with nearly every feature a gaming board can have, and comes with premium upgrades like PBT keycaps, hot-swap keys, multi-point connections, and case lighting. It’s definitely a step above the competition, assuming that you’re okay with what’s now “basic” switch tech.

But between my own personal programming pet peeve and the premium pricing, this tiny keyboard is decidedly mid-tier overall. It’s probably the best option if you must have a wireless gaming board at 60 percent, but for anyone without bottomless pockets or a with more general-use focus, there are better (and cheaper) options.

See our roundup of the best wireless keyboards for more recommendations and product comparisons.

K70 RGB Pro Mini Wireless: A feature list as long as its name

Name a mechanical keyboard feature, and the K70 RGB Pro Mini Wireless (I’m just gonna call it the K70 Mini from now on) probably has it. RGB lighting? Check. Premium PBT plastic keycaps? Yup. Wireless? Two different flavors (USB and Bluetooth), three different devices. It’s rocking the ever-popular 60 percent form factor, chopping off the function row and everything east of Enter, and it even has a fairly unique angular look with bonus lighting around 360 degrees of the case.

This is a gaming-focused board, so it makes do without some of the more ridiculous excesses like a full metal case or gasket mounting. But its physical customization game is on point, thanks to a standard key layout compatible with most keycap sets. You can also swap out the switches themselves for any Cherry MX-compatible models. But with excellent authentic Cherry parts on board (“Speed Silver” linear switches on our review unit), you might not want to, especially if you bought this thing for gaming.

What’s that? You want more? Well you should, considering the price tag. How about a spare space bar that can show off that RGB light show, dedicated keycap and key switch pullers, and a sweet 6-foot braided cable for when the battery runs out? Corsair also included a branded replacement Escape key, in case the conspicuous badge on the front isn’t enough. Round it out with single-stage keyboard feet and an aluminum deck, and you come to the bottom of a long feature list.

Jumping in, typing on the K70 Mini feels premium right away. The silky-smooth switches and the gritty, grippy texture of the keys combine for an excellent experience. I usually need a day or two to acclimate to a new keyboard, since I’m used to spoiling myself with premium parts. It only took an hour or two this time thanks to all that pricey plastic, though I wish a keyboard rest could have been included, like other Corsair models. Chalk it up to the K70 Mini’s portable form factor.

And portable it is. Going with a plastic body and leaving metal for the deck was a smart move, as even with all the bells and whistles this keyboard weighs in at just over a pound and a half. That makes it incredibly easy to throw in a bag for your next LAN party or a little on-the-go Genshin Impact with your phone or tablet. True, competing 60 percent boards are just as good in that sense, but the multi-point Bluetooth gives the Mini an advantage in this area.

One bit of physical design I’d like to highlight: a large, easy-to-find power switch, hanging out right above the Escape button. Too many small boards make it hard to turn the thing on and off, and that’s an important detail with a design that will suck down battery power with the light show enabled.

With near-endless customization of the keycaps and key switches, you’d expect the software for the Mini to be equally customizable. And you’d be right… up to a point. Mechanical keyboard purists will be disappointed that you can’t program the keyboard via open source QMK or VIA firmware, but Corsair’s iCue is astonishingly well-equipped and surprisingly easy to navigate. That’s more than I can say for some competing “gaming” driver packages, like Logitech’s G software.

There’s a staggering amount of options in iCue. Polling rate, brightness, national layout, debounce time, even a toggle that lets you operate the keyboard in “PlayStation mode” for console fans. And all of it can be saved to one of two onboard memory slots. If only the programming of the keyboard’s actual functions was so complete.

Like so many other mini keyboards, it’s impossible to move the Function button, so truly customizable layouts are incomplete by definition. That includes my preferred layout, with arrow keys on the main layer at Alt/Fn/Windows/Ctrl, and the Fn button replacing Caps Lock. It’s easy in QMK, impossible in iCue. For 60 percent keyboards that live and die on user customization, that’s a huge drawback.

Programming deficiencies aside, the K70 RGB Pro Mini Wireless does tick all the standard boxes for gamers. But it’s also $180, more expensive than plenty of wireless mechanical boards. It’s about on par with Razer’s BlackWidow V3 Mini, but that board’s also wickedly expensive—take a look at the Logitech G613 or even the Asus Falchion for something more affordable. And though it’s a matter of taste, the latter manages to get full arrow keys in the design with barely any extra dimensions.

If money is no object and you want every possible feature you can imagine (minus the option to move that Fn key around), the K70 RGB Pro Mini Wireless fits the extremely specific niche of tiny wireless gaming mechanical keyboards very well, with the standout feature of hot-swappable switches. But if you’re in any way frugal, if you don’t need every feature under the sun, and you want more flexible programming, look elsewhere.