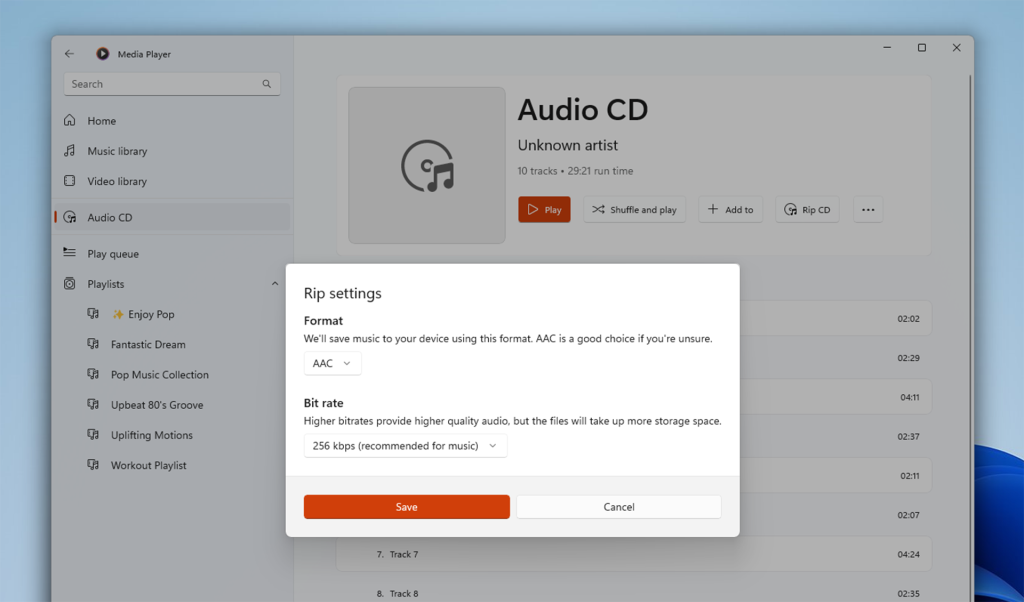 I can’t remember the last time I played music on a spinning compact disc. It’s been the better part of 20 years since I spent countless hours ripping CDs into a bloated MP3 collection, trying to call the bluff on my iPod’s “10,000 song” storage capacity. But apparently someone at Microsoft is still rocking a CD player, because a forthcoming update to Windows 11’s Media Player app will bring CD ripping back from the dead.

If you’re not old enough to remember the premiere of Lost, CD ripping is the act of copying the uncompressed music of a CD onto a computer, typically in a compressed format like MP3. It was a part of more or less every music manager program for decades, notably the competing iTunes and Windows Media Player, but the feature has been notably absent from Windows since the application was replaced with Groove Music in Windows 8, which itself converted into the now-default Media Player app in Windows 11. (But if you’ve been upgrading your Windows build for a while, you might still have the “classic” Windows Media Player still installed, even on Windows 11.)

Groove Music didn’t include CD-ripping capabilities, nor did the rebranded Media Player (the new one that doesn’t look like a Vista program) launched last year based on the same code. But a new Windows Insider update of the program for Windows 11 Build 22000 spotted by Ars Technica will add the feature back in. It’s a little barebones at the moment, with ripping to AAC, WMA, FLAC, and ALAC formats at up to 320kbps supported. MP3, a technically inferior but still widely-used format, is not supported. The program also lacks the ability to mix and burn CDs in any format — my inner 14-year-old is devastated.

It’s interesting that Microsoft is choosing to focus on CD support now, years after the format peaked and was replaced with digital music, then streaming digital music. But physical media is having a bit of a comeback. According to the RIAA, CD sales grew by a shocking 48% in 2021 versus the previous year, reversing a steady decline that’s been ongoing since 2004. CD sales still pale in comparison to single-song digital downloads, but like vinyl albums, CDs are coming back in a way that can’t be ignored. They made up 14 percent of American music sales for 2021, though direct sale music has shrunk by more than three quarters since peaking in 2007.

Windows 11’s Media Player app isn’t the only way to rip CDs, and arguably it’s far from the best one for power users who demand more options like lossless audio. Connoisseurs generally recommend Exact Audio Copy for Windows, which supports a huge range of music formats, connection to databases for automatic track info, advanced loop recording, and even basic audio editing. But it’s good to see that Microsoft is aware of industry trends and working to keep Windows relevant for music lovers.