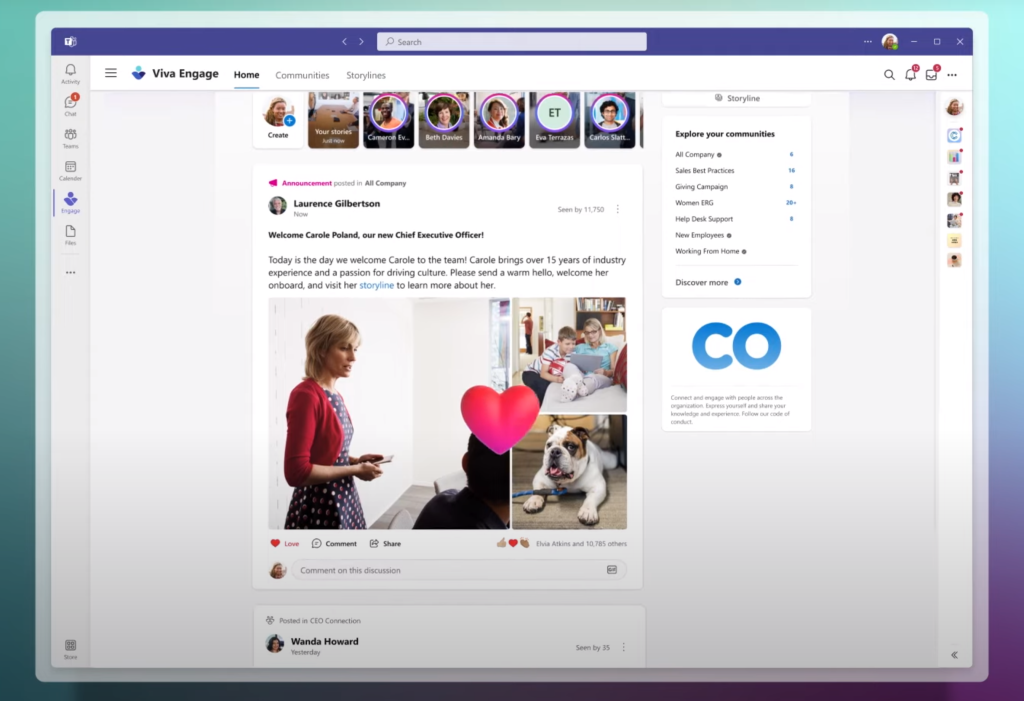 For those of you who love performative networking at work to get ahead, you’ll be thrilled to know that Microsoft has a new platform for connecting with your coworkers: Storyline, which looks very much like Microsoft saw Facebook and thought, yeah, we can do that.

Weirdly, Microsoft can’t even seem to decide what to call its new network. In one video, the company calls the new network Microsoft Viva Engage. In another, Microsoft calls the new platform Storyline. They look identical, and perform the same function: allowing you to post to your company’s feed, create groups, and tell stories in the vein of Facebook and Instagram. Editor’s Note: Microsoft says Storyline is a feature of Viva Engage, a Facebook-like feed of posts and/or stories.

They all run on top of Microsoft Viva, which was Microsoft’s effort to replace your company’s intranet when it launched last year with Viva Connections, Viva Insights, Viva Learning, and Viva Topics. Viva Connections was announced as a virtual place for employee interactions, which basically sounds like the progenitor for Storyline/Viva Engage. So, yes, that’s now three names for what is essentially the same thing.

But wait — doesn’t Microsoft already have a social network? Well, yes, it has two: Microsoft bought Yammer for $1.2 billion a decade ago, and since then the collaborative platform has been integrated into Office and Teams, where… you’ve probably never used it. And, of course, Microsoft bought LinkedIn for $26.2 billion in 2016, which has become the de facto site for polishing up your resume and positioning yourself as a business influencer.

According to Microsoft, Storyline will open in public preview in August. The Communities app for Teams will be rebranded as Viva Engage. Current Yammer customers will be able to deploy and pin Viva Engage on the left rail of Teams through the Teams Admin Center. Posts made in Storyline will reach Microsoft Viva Connections, Outlook, Teams, and Yammer via a new Storylines tab.

Microsoft also says that while Viva Engage will be made available to commercial Microsoft 365 customers at no additional charge, your company will need a Yammer license to use the app.

Nevertheless, with Storyline you’ll still be able to virtually listen to lessons your chief executive has learned in the business world, and inspirational messages from your HR department. You’ll be able to post inspiring messages of your own, react with emoji (the “praying hands” is a favorite) and scatter corporate references all over your timeline. You’ll be able to post about your work, and follow other interesting people in your company to learn about them, Microsoft says. You can share short videos to express yourself.

In more practical news, Microsoft also announced Excel Live, which is a way to collaboratively edit Excel documents within Teams. That will probably be useful for discussing business during Teams calls between clients, business leaders, and rank-and-file workers. Of course, who’s going to have time for that?

This story was updated at 10:48 AM on July 20 with additional details.