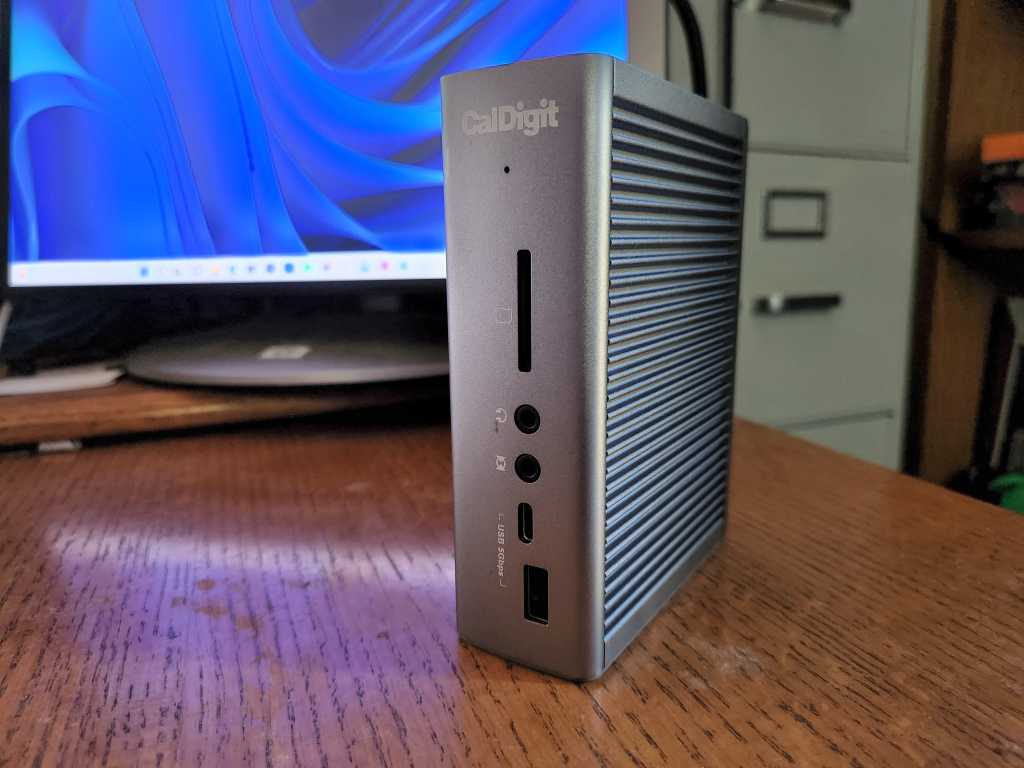 CalDigit’s Thunderbolt Station 3 Plus has been a popular dock for several years, but the emphasis on an external Thunderbolt port makes this less attractive for PCs, unless you’ve invested in Thunderbolt-powered displays.

CalDigit’s Thunderbolt Station 3 Plus is one of the most popular Thunderbolt 3 docks available, and it’s easy to see why: a space-saving vertical orientation, 87W charging, gobs of available ports, niceties like a S/PDIF optical connection and an additional Thunderbolt port for daisy-chaining devices.

Note: This review is part of our roundup of the best Thunderbolt docks. Got there for buying advice, product comparisons, and recommendations.

You can drive a single external display directly from the dock, however, as there’s a single built-in DisplayPort 1.2 connection. To drive two external 4K/60 displays that use DisplayPort or HDMI connections, you’d need to invest in a separate USB-C dongle (or another Thunderbolt dock—a prohibitively expensive choice) and connect it to the downstream Thunderbolt dock.

The TS3 Plus also includes one full-sized SD (SD 4.0 UHS-II) card reader, the S/PDIF port, gigabit ethernet, and two 3.5mm audio jacks—one in, one out. Five USB Type A ports are also included (all 5Gbps USB 3.1 Gen 1) and two USB-C ports (one 5Gbps port, and one 10Gbps port). You can charge a smartphone from either the front-mounted USB-A port or the rear USB-C port, as both supply 7.5W of power.

The TS3 Plus measures 5.15 x 3.87 x 1.57 inches, and weighs 1.04 pounds. Though it lacks a supporting stand, it rests easily in a vertical position, which is a definite plus in terms of saving space. CalDigit also includes small rubber feet for positioning the aluminum dock in a horizontal orientation.

We used an extra USB-C dongle to enable a second HDMI display, which worked, though the connection dropped momentarily on both displays when playing back video on both displays and transferring files. Otherwise, high-bandwidth video playback went smoothly. The external audio jack also didn’t work initially, but did on a subsequent attempt. CalDigit’s TS3 Plus barely warmed under load.

While we’ve previously listed the CalDigit Thunderbolt Station 3 Plus among the best Thunderbolt docks, it’s also true that a number of dock manufacturers now compete very well against it. For Mac users, this CalDigit dock may be a solid choice. For PC users, we believe there are now better alternatives.