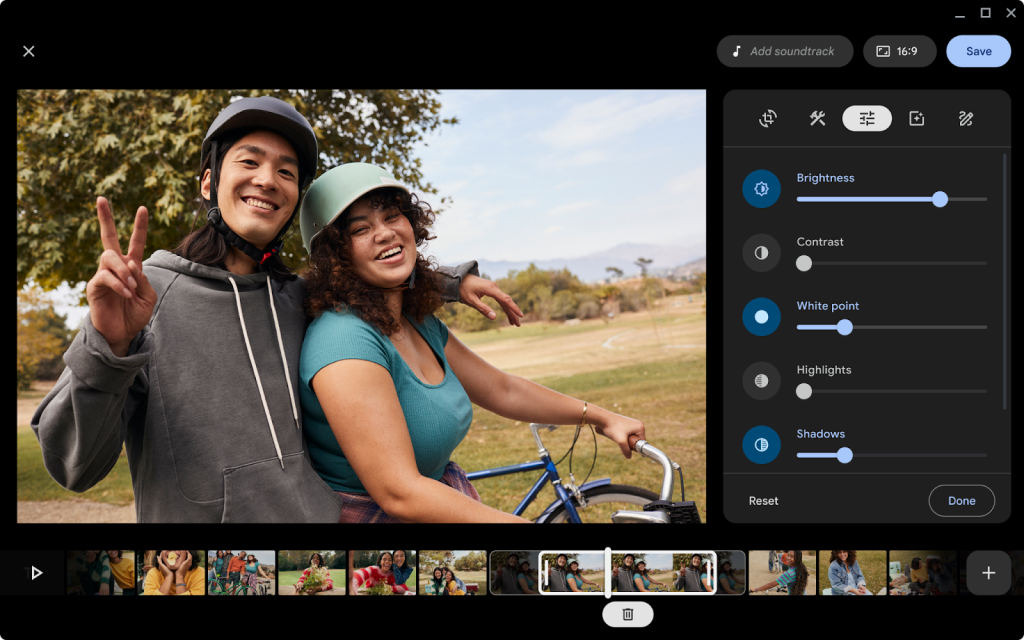 Move over, Windows — Google Photos is getting its own video editor, which will arrive on Chromebooks this fall. And if that’s not enough, the professional-grade LumaFusion video-editing app will be available on Chromebooks, too.

Like other developers, Google typically releases a bundle of new features, which roll out over time. The headliner for the fall, however, will be the new video editor, which will complement Google Photos in much the same way Microsoft’s own Video Editor (or Clipchamp, a superior alternative) complements Windows’ Photos app. Chromebooks will also get light and dark themes, as well as other personalization options.

If a still image of the video editor that Google released is indicative of the final feature set, however, than Microsoft has nothing to worry about. That screenshot only shows the option to adjust characteristics like contrast and brightness, add a soundtrack, and possibly stitch clips together. Google also says that you’ll be able to add a title card, too.

On the other hand, what Google is trying to do seems much more in tune with what it algorithmically knows about you and your movies and photos. The Photos movie editor will offer themes, as Clipchamp does; but it will also pull its own clips, apparently. “Start by selecting a theme and the people (or pets!) you’d like to feature, and Google Photos will make a movie with both video clips and photos,” Google wrote in a blog post. “It even intelligently selects the most meaningful moments from your long videos.”

But there’s more: Google also said that it’s bringing the LumaTouch LumaFusion app to Chromebooks. That’s not only interesting as it gives Chromebook users a professional-level video editing application, but it also brings what has previously been an iOS app into the ChromeOS universe — Apple even awarded LumaFusion its app of the year previously. The app adds video transitions and distortions, graphics and sound effects, plus narration and color grading, according to Google.

Other, smaller upgrades are also coming to the Gallery and Photos apps for Chromebooks over the next few months. Like in Windows, you’ll be able to open a photo in the Gallery app and then open it within the Photos editor. Google also plans to add new PDF editing features to the Gallery app beginning in August, allowing users to fill out forms and highlight text.

Finally, you’ll also be able to pull photos from Photos and use them as background images to personalize your desktop. Photos will also form the foundation of a new Light and Dark theme for Chromebooks in August, with wallpapers that can self-adjust for the change in tone — a nifty trick that can be programmed to take place as day turns into night, and vice versa.

Chromebooks are also gaining two new productivity features, including virtual “desks” (Google-ese for Windows’ virtual desktops, presumably) which will allow users to group tabs and apps together for specific tabs. Google’s implementation will allow you to open and close them with a click. Finally, if you click on the date on the Chromebook shelf (taskbar), a calendar will open up that can be used to access Google Calendar dates. Google will launch the calendar feature in August, and add the desks by late September, the company said.