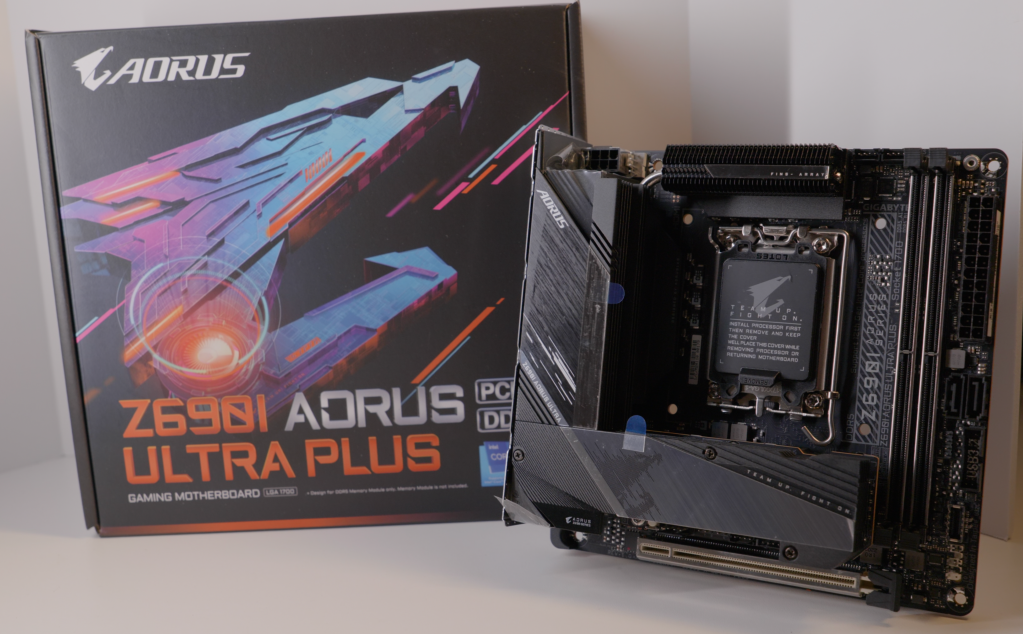 Image: Thiago Trevisan
At a glance

There aren’t a lot of options for mini-ITX builds, but the Gigabyte Z690i Aorus Ultra Plus ITX motherboard stands out for its price-to-performance feature set, and clean design. And as an added bonus, it’s also cheaper than many of its competitors that offer the same (or lesser) specs.

The small form factor gaming PC is not just a fad: It’s now a mainstream choice that promises a pint-sized powerhouse with fewer compromises in 2022.

With the arrival of Intel’s 12th-generation Alder Lake, new technologies such as DDR5 and PCIe Gen 5 are here. That’s not even the exciting part—CPUs such as the Core i9-12900K blaze the trail for gaming and can moonlight as workstations, too. (This mainstream display of CPU virtuosity is partly to blame for the decline in high-end desktops.)

All that power can now fit in the palm of your hands thanks to the Gigabyte Z690i Ultra Plus. It’s the recent upgrade meant to address issues in the original Z690i Ultra. We’ll discuss the strengths and weakness of this motherboard, pricing, features, and if it will work in your build.

What exactly can you pack into a small motherboard? As it turns out, quite a lot! Let’s take a quick peep at what’s included, and we’ll discuss what features and specs matter most. 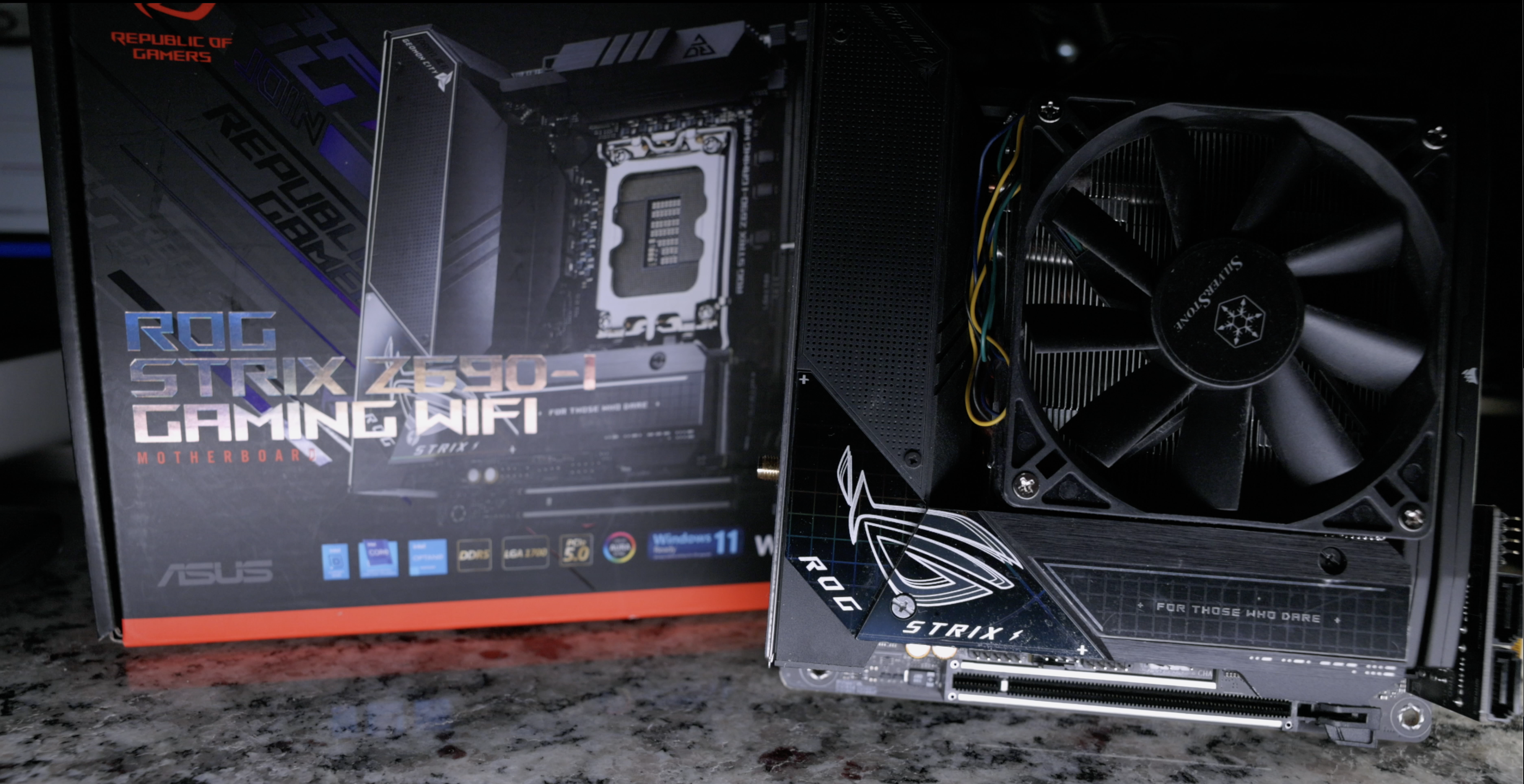 Impressive list of specs, right? It has almost everything you’d want—the only Z690 Mini ITX motherboard that packs a little bit extra is the Asus Strix-I that we recently reviewed. That includes Thunderbolt 4, and a daughtercard giving you four SATA ports. It comes in at an MSRP of $439, however—much more expensive than the $330 Gigabyte Ultra Plus Z690i here.

Let’s see how it fares:

It has a backplate! Sorry, had to get that one out of the way first. Otherwise, It’s a little bundle of power. Adorable, isn’t it? With a nice, clean design—it only has subtle clues that it packs a punch with its Aorus styling. The build quality, more importantly, feels solid.

Tastefully done implementation of RGB is here, of course. In most Mini-ITX builds, the RGB is seldom seen due to tightly packed tiny cases—but some do let that luminescent light shine through.

Overall, a straightforward design that keeps the features on tap in a clean, well-laid-out scheme. Substantial physical feel on the build quality is very welcome as well, and yes, we’re a fan of backplates. (Useful or not, they’re cool!)

The hot and heavy i9 12900K is no longer scary for Mini-ITX boards: Much like the Asus Strix-I, this board packs enough power and cooling capabilities to tame the beast.

Running anything less than an i9 12900K? Likewise, it will handle them marvelously. Indeed this board would make a perfect pairing for the 12700K or even the 12600K, depending on your use case.

DDR5 performance is also here, and while there are certainly some diminishing returns, it’s nice to be future-proof. If you’d like to save a few bucks and still maintain great performance, the DDR4 version of this motherboard has an MSRP of $309. (And you’ll save on the DDR4 RAM cost, too)

PCIe Gen 5 and Gen 4 also keeps your GPU and NVME M.2 capabilities in the same league as the bigger Z690 ATX options.

The Gigabyte UEFI BIOS has been greatly improved from previous generations as well, making adjustments and important system tweaks simple.

I generally prefer to use the BIOS for a few very specific tasks: setting the XMP profile for RAM, manual CPU overclocking, setting hard drive boot order, and even a fan profile if I’m not using a dedicated fan controller.

BIOS updates, and the occasional tinkering with other settings deeply imbedded within are all simple with this BIOS. Q Flash is also available without a CPU, for a BIOS update if needed. Gigabyte also offers a suite of software that can be installed within windows itself, such as RGB Fusion and other system controls—but generally I’d rather keep certain tasks to the BIOS as software is often less stable in my experience.

Mini-ITX builds are all the rage, and the selection of motherboards is generally a smaller pool compared to ATX. Gigabyte has a great price-to-performer here for this segment. Its updated form also squashes the issues of its Ultra predecessor, so that can give consumers a confidence boost.

Coming in a $330 is not cheap, but there are no other options that offer the same feature set for this price. The Asus Z690 Strix-I costs much more, and cheaper ITX boards lack the rich spec list of the Z690i Ultra Plus. (Gigabyte also offers a “Lite” version of this board, but sans the next-gen features.) MSI’s Z690i Unify competitor is also more expensive. While the Ultra Plus is not as loaded as the Asus Strix, the cheaper price and *nearly all* of the relevant features land it with a respectable showing.