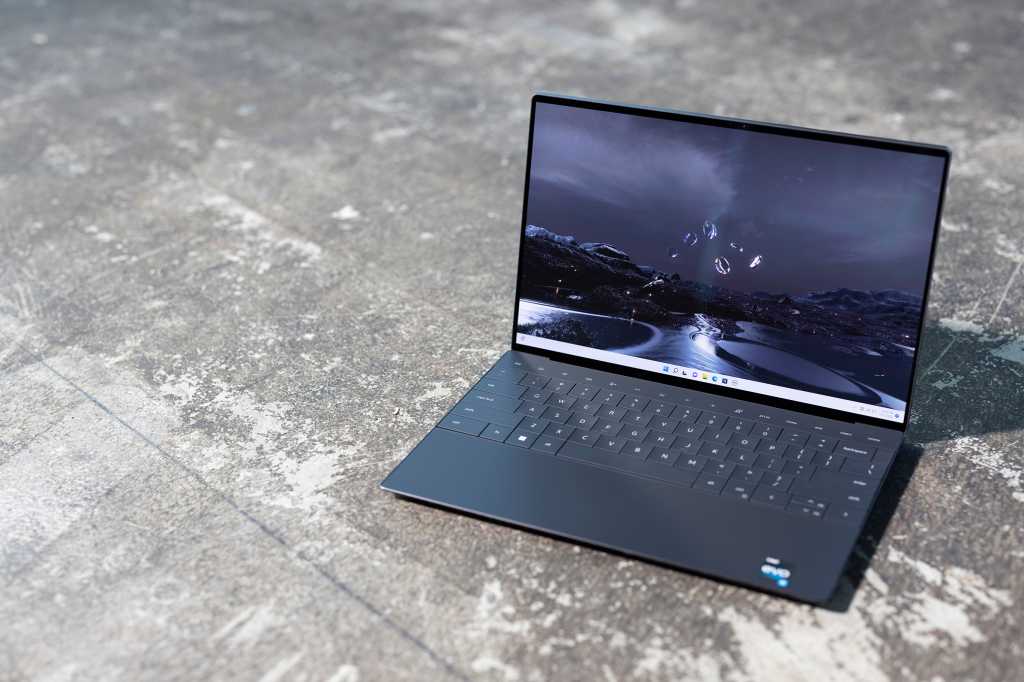 Dell’s XPS 13 Plus once again tries to set standard for all laptops and largely succeeds, but its battery life and lack of ports don’t inspire.

Like cars and fashion, laptop makers tend to all mirror each other’s looks and features. For example, ridiculously large bezels were all the rage until Dell’s original XPS 13 broke from the pack and introduced InfinityEdge bezels. Within a generation, any laptop with large bezels looked years if not a decade out of date. The latest Dell XPS 13 features much of the same design cues, but with some, shall we say, interesting changes.

The XPS 13 offers blazing fast processing performance, a gorgeous OLED display, and above-average audio. When it comes to what most people want in an ultraportable, it tics off a lot of boxes. It’s lightweight, luxurious, and powerful. However, it’s missing a headset jack and there are only two USB-C ports. The lack of a headset jack is certainly odd, but we still feel this is a fantastic pick for business professionals or graphic designers.

Dell XPS 13 Plus specs and features

Let’s check out what’s inside the XPS 13 Plus. The review sample has an Intel Core i7-1280P CPU. The CPU features an impressive sounding 14-cores (6 performance cores and 8 efficiency cores) of Alder Lake CPU inside. Here’s the rest of the specs for you to eyeball, but the key features include a standard M.2 Gen 4 SSD and the option for a luscious 3.5K OLED panel.

The Dell XPS 13 Plus 9320 once again tries to set the style stage for all laptop makers. The most striking feature is its “trackpad-less” look that masks the trackpad underneath a contiguous piece of Gorilla Glass. It gives the user the impression of a large wrist rest without the typical rectangular cutout for the trackpad we’re so used to. The trackpad actually starts around the left side of the space bar and stretches to the right Alt key. There’s also a slight margin of about a quarter of an inch from the top and bottom as well.

Although amazing to look at, one issue with the hidden trackpad is not knowing where the edges are. In my experience, however, using the trackpad felt as natural as any other. It’s likely years of conditioning from the trackpad always being in the central portion between your palms. Others may have their brains broken with it and want to see the lines around the edge, but the experience was seamless for me.

The obvious question is why even bother with the trouble if what works ain’t broke? The answer is known by anyone who wants form over function, which is most of the world. That answer won’t satisfy many, but if you’re reading this wearing skinny jeans instead of loose-fitting jeans, you might be a hypocrite about function taking precedent over form.

What’s perhaps scary clever about the trackpad is that it’s so attention grabbing you may skip the other things worth talking about. For example, the other little noticed design change with the XPS 13 Plus are the capacitive touch function keys (these replace mechanical buttons). They default to media functions and screen brightness. With the press of the function key to the left of the spacebar, it converts to F1 to F12.

Look, I don’t mind the screen brightness and volume being capacitive touch, but having the escape, delete, home, and end key as capacitive touch is particularly jarring. Pressing Ctrl-Alt using physical keys and then having your finger crunch into the capacitive Del key just feels wrong. The all important Esc just doesn’t feel right without physical feedback.

When it comes to ports on the XPS 13 Plus 9320, it’s about as minimalistic as the trackpad. In fact, it’s barely clinging on to even being a plural. Yes, it has two USB-C ports, but lose one of those and the XPS 13 Plus goes form “ports” to port. You can see that below where the left side of the has a single USB-C port available.

We have no need to show you the other side because that it’s essentially a mirror image of the left side. There’s no 3.5mm combo jack for your headset or a USB-A port. The good news is Dell does at least give you a USB-C to 3.5mm dongle as well as a USB-A to USB-C adapter. This isn’t the first XPS 13 Plus to ditch a headset jack nor USB-A, but it still makes us sad. Yes, removing ports saves on internal space—but that’s starting to sound like an excuse for everything.

At least both ports offer Thunderbolt 4 support, so you can charge and run an external display of off a single port at very high speeds (with a dock or hub). On the road, however, plug in the 60-watt charger and you have one port free.

Dell has been leaning into better audio on its XPS-series of laptops and the XPS 13 Plus doesn’t disappoint. The speakers are bottom firing through slots milled into the aluminum body. It gets decently loud with fairly rich sound. To be honest, the XPS 13 Plus sounds better than most thin gaming laptop’s we’ve seen.

Other premium laptops are offering 1080p resolution and higher so the XPS 13 Plus’ 720p webcam seems pretty pedestrian. In reality, the image quality is fine. The webcam module also includes a separate IR camera for Windows Hello biometric support.

The XPS 13 Plus supports presence detection, which means the screen dims when you look away and then brightens up when you walk up to it. With Windows Hello enabled, you should be able to have it log in for you as well. If you’re not into all the facial features, you can also just touch your finger to the power button, which has an integrated finger-print reader.

If you’re the kind of laptop buyer more interested in what’s inside, we’ll kick off our look at performance of the XPS 13 Plus in Maxon’s Cinebench R20 benchmark. For our CPU and graphics testing, all of the tests were conducted in Windows 11 and with the laptops set to their performance presets.

Cinebench is a test based on the same engine used in its professional 3D modelling product. We run the test using all cores, and a single core.

Under a multi-core load that scales well, the XPS 13 Plus and its Core i7-1280P easily outpaces laptops based on Intel’s older 11th gen CPUs as well as all generations of AMD’s Ryzen U-class CPUs. The upshot is if you’re looking for ultra portable laptop that can actually belt out decent performance for 3D modelling the XPS 13 Plus is a contender. That also likely means it should do well with compiling code as well as other tasks that use all of the cores.

In single-threaded or single-core performance the XPS 13 Plus also leads the pack which means it should do well in lightly-threaded tasks such as most things people do in Office, photo editing and browsing.

Although Cinebench R20 is a fine measurement for an all-core load that may take a minute or three, some things take far longer. Longer workloads build up heat. Laptops deal with this by increasing fan noise or simply by slowing down the CPU.

For this test, we use the free and popular Handbrake encoder to convert a 4K 6.3GB video encoded in H.264 to the more efficient H.265 CODEC using the CPU. The tasks leans more CPU cores and takes quite some time to run. On the quad-core 11th gen MSI Prestige 14 Evo, for example, it takes about one hour and 40 minutes.

You can also see the direct impact of the laptop maker’s decisions with the older Lenovo IdeaPad Slim 7, which slides in front of the XPS 13 Plus. Performance on very long running and CPU-heavy tasks puts the XPS 13 Plus in good company, but it doesn’t quite end up in first place. Realistically, it’s fine.

Up next is UL’s PCMark 10, which is a benchmark that attempts to measure usage tasks in video conferencing, document editing, and digital content creation such as 3D modelling and rendering. The overall winner is the Zenbook 13 S OLED with its Ryzen 7 6800U, but we’re basically looking at a spread of about 4 percent. Overall, we’d call it not a big deal and most people will be happy with either.

The real upshot is that for what most people do on very thin and very light laptops, any of the machines will do quite well. On the flip side, the Intel-based laptops do better in the Essentials category, which measures app startup using Chromium, Firefox, LibreOffice Writer, and GIMP image editor. Both Intel laptops also do better in video conferencing.

In digital content creation, the XPS 13 Plus and the newer Asus Zenbook 13 S OLED easily outpace their rivals.

We certainly didn’t expect the stellar run time like we saw in the Asus Zenbook 13 S OLED with its Ryzen 7 6800U, especially since it has a 22 percent larger battery, but we were hoping for similar run times as the MSI Prestige 14 Evo with the same size battery. As I noted above, the screen resolution of the XPS 13 Plus is far higher than the Prestige 14 Evo, but at the same time—it’s an OLED, which should do better on video run downs.

The upshot is battery life won’t be horrible on the XPS 13 Plus, but it certainly won’t impress either. It lasted a little over eight hours on a single charge.

There’s a lot to unpack with the XPS 13 Plus. Dell’s decision to lose the headset jack and cut down to two ports as well as the inclusion of capacitive touch keys aren’t exactly welcome. But is it enough to knock out the other design cues? The hidden haptic trackpad, for example, makes the XPS 13 Plus downright modern and elegant looking. Yes, many will claim to not care about style. However, one look at your clothes, car, and furniture will indicate that style does largely dictate consumer choice.

Although the style of XPS 13 Plus isn’t guaranteed to set the standard for other laptops to follow, there’s a lot of history that says it will. Beyond the style, you’re still getting leading edge performance and a beautiful OLED panel all wrapped in a stunningly beautiful laptop. It’s still a solid option for business professionals and graphic designers.