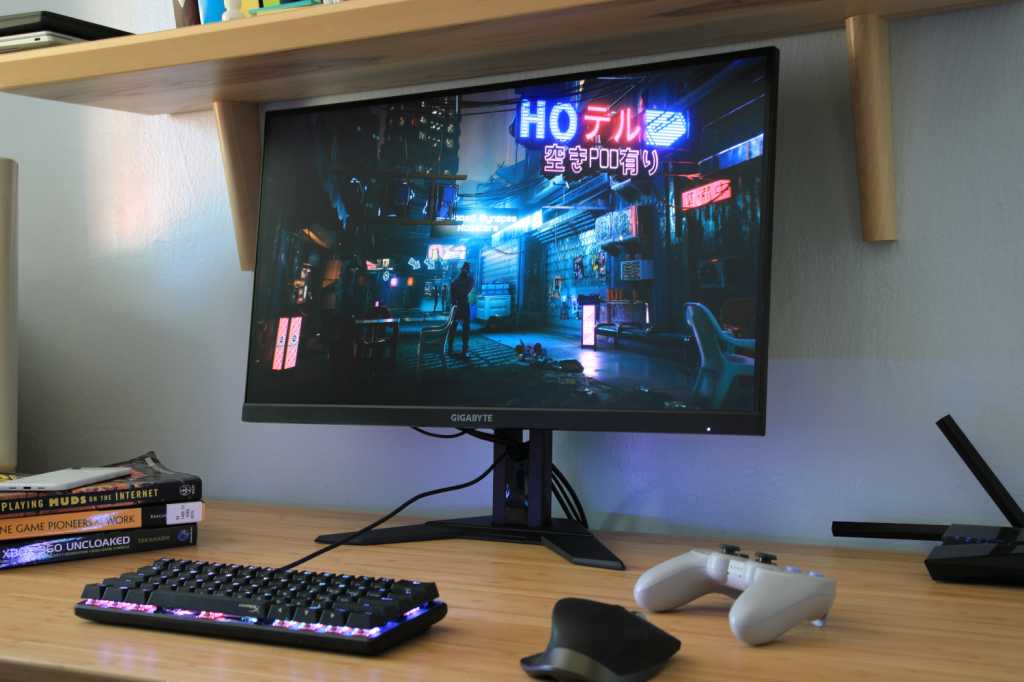 The Gigabyte G27F 2 is a budget 1080p gaming monitor with great color performance and a very high refresh rate, but issues such as a disappointing contrast ratio and lackluster design spoil what could have been something special. Still, the display’s terrific motion clarity and affordable price point make it a decent option for those who enjoy fast-paced games and have a tight budget.

Shoppers looking for a budget monitor have to compromise. It’s possible to snag good color performance, solid contrast, eye-catching brightness, or a high refresh rate, but most budget options check just two of those four boxes. Gigabyte G27F 2 manages to check three. Unfortunately, it has one big flaw that holds it back.

This review is part of our ongoing roundup of the best gaming monitors. Go there for information on competing products and how we test them.

The Gigabyte G27F 2 is a 27-inch monitor with a resolution of 1920×1080 that uses an IPS display panel. It also has a refresh rate of up to 165Hz (and, in testing, achieved 170Hz). That’s a very high refresh rate for such an affordable display.

Pricing is very affordable, carrying an MSRP of just $199.99. This is a new model, so I expect it will sell near that MSRP for several months, at least. Still, this is at the low end of pricing for a 1080p 165Hz monitor even when sold at its full MSRP.

The Gigabyte G27F 2’s look is aggressively basic. It has a matte-black chassis with slim bezels on three sides and a large chin on the bottom. Around back there’s more matte-black plastic. A glossy upper quarter adds a hint of class—but only a hint. There are also a few PCB-like etchings in the corners, but they’re hard to notice.

It’s a similar story for the stand. A skinny, matte-black neck connects to a small wedge-shaped base. The stand’s footprint is also small, making it a good choice for small desks.

Height and tilt adjustment are available, but swivel and pivot are missing. That’s not a problem at the Gigabyte G27F 2’s price, as even height adjustment is not a guarantee at the low end. A 100x100mm VESA mount is available to attach a third-party monitor stand or arm.

On the whole, the Gigabyte G27F 2’s design is nothing special. That’s fine. The G27F 2 covers the basics at a low price. It’s also tame enough to have broad appeal. It won’t stand out in a living room or home office.

The Gigabyte G27F has two HDMI 2.0 ports and one DisplayPort 1.2. The lack of more capable connection standards is not an issue, as all three ports can drive the monitor at its maximum resolution of 1080p and 165Hz. The inclusion of three video inputs is typical of a budget monitor, but still appreciated, as monitors below $200 will occasionally get by with just two.

A USB hub is available through a USB-B upstream port but connects to just two USB-A 3.2 ports, both of which are on the monitor’s rear panel. That’s useful for a wired keyboard and mouse but not convenient for USB thumb drives and other devices that are frequently moved.

Monitor features are controlled by a joystick on the monitor’s right flank. Gigabyte’s large on-screen menu is easy to read, but its location near the center of the monitor can make adjustments to image quality difficult to notice.

The menu layout could be better. Many quality settings require diving through several menus, and the menu system is a little slow. I had similar issues with the more expensive Gigabyte M27Q X.

There’s also a dedicated sRGB mode for creators who must work in that color space. The sRGB mode could be better, though: My testing found it limited sRGB color coverage to 95 percent of that color gamut, meaning it doesn’t show all the colors that it should.

A variety of basic gaming features are available. There’s a black equalizer, which boosts black levels to show details in dark areas, and an on-screen crosshair. One unusual feature is an on-screen menu that can show key PC metrics like CPU and GPU temperature. It requires the installation of Gigabyte software.

The Gigabyte G27F 2 packs a lot of video input and menu options, but it lacks audio. Speakers aren’t included. A 3.5mm audio is available for connecting external audio sources.

The Gigabyte G27F 2 is a budget 1080p gaming monitor, which means shoppers should keep expectations in check. The G27F 2 goes above and beyond in some areas but falls behind in others.

Maximum SDR brightness is strong at 353 nits. Though far from the brightest monitor, the Gigabyte G27F 2 is a standout in the budget space, as many monitors sold at or below $200 can only achieve 250 to 300 nits.

This brightness, along with its matte display coat, makes the Gigabyte G27F 2 suitable for nearly any room. You’d need full sun from a nearby window to begin to wash out the image.

The Gigabyte G27F 2 had a contrast ratio of only 230:1 out of the box. This extremely low contrast ratio is unusual but not unheard of. I’ve recorded similar results from monitors at the low end of their own competitive segments, such as the Dell U2422H and Acer R240HY.

Blame the monitor’s elevated black levels. Dark images have an obvious, hazy gray cast that is visible even when viewing the monitor in a brightly lit room. This is the dreaded “IPS glow” that plagues so many monitors with an IPS display panel, but the G27F 2 has a severe case.

I made efforts to tame the glow, with some success. Lowering brightness to 20 and boosting contrast to 70 improved the measured contrast ratio to 460:1. That’s still not great, however, and the glow remains obvious.

Color accuracy is fine. It’s not as accurate as some competitors, but most modern monitors are accurate enough that it won’t be an issue in basic productivity, gaming, or other entertainment.

The G27F 2’s color temperature performance was good, with a measured temperature of 6700K. That’s only slightly cooler than the target of 6500K, and I doubt most people would notice the difference.

Gamma was slightly off target, recording a curve of 2.1 when set to 2.2. Other gamma modes were similarly off. This means the image was a bit brighter than it should appear to be, which may slightly contribute to the monitor’s contrast issues.

Sharpness isn’t great. It provides 1920×1080 resolution in a 27-inch display, which works out to about 82 pixels per inch. Only a 32-inch 1080p monitor will appear less pixel dense. The array of pixels is visible in bright images and apps, including Word documents and web pages with a white background. Games with lackluster anti-aliasing will suffer a lot of shimmer in motion and video content can look soft.

The Gigabyte G27F 2 has excellent color performance for a budget monitor. It’s also bright, making it suitable for nearly any room. The contrast ratio is a big issue, however, sapping the monitor’s image of depth and vibrancy.

Gigabyte’s G27F 2 is a secret HDR monitor. The spec sheet lists it as “HDR ready,” but HDR support isn’t advertised on the monitor’s product page or product listings I found at online retailers.

That’s for the best. The G27F 2 can detect an HDR signal and switch to HDR mode automatically, but it otherwise lacks features to handle HDR.

The monitor’s maximum brightness increases a hair, from 353 to 359 nits, with HDR on. I also noticed the contrast ratio is improved to 600:1, though only with Windows 11’s HDR settings at their maximum brightness. This causes other image-quality issues such as lost detail in bright images.

In short, it’s not a capable HDR monitor, and overall image quality is worse with HDR on. It’s best to leave HDR turned off.

The Gigabyte G27F 2’s specifications claim a refresh rate of up to 165Hz. My review monitor slightly exceeded this, as it was listed as supporting up to 170Hz when connected to my desktop. The monitor officially supports AMD FreeSync Premium Pro, and Nvidia G-Sync functioned in my testing.

Motion clarity is a highlight. The monitor has a sharp and defined image in motion, especially at higher refresh rates. Most detail is visible even in fast moving objects. It’s not tack-sharp, or as good as monitors with higher refresh rates, but it’s superb for a monitor sold at $199.

Gigabyte offers four different OverDrive modes to modify motion clarity. Picture Quality, the default mode, does introduce some artifacts around fast motion, but I suspect many gamers wouldn’t notice. The Smart OD mode is also rather tame. The Balanced mode is more aggressive, and the Speed mode introduces obvious artifacts. You can also turn off OverDrive entirely, as well, and it’s a good option. Motion clarity remains solid with OverDrive off.

The Gigabyte G27F 2’s motion clarity is great given its price, and a significant upgrade over a 60Hz monitor. It has no major disadvantage in motion clarity when compared to the Acer Nitro XV272, a 1080p 165Hz monitor with an MSRP of $249. 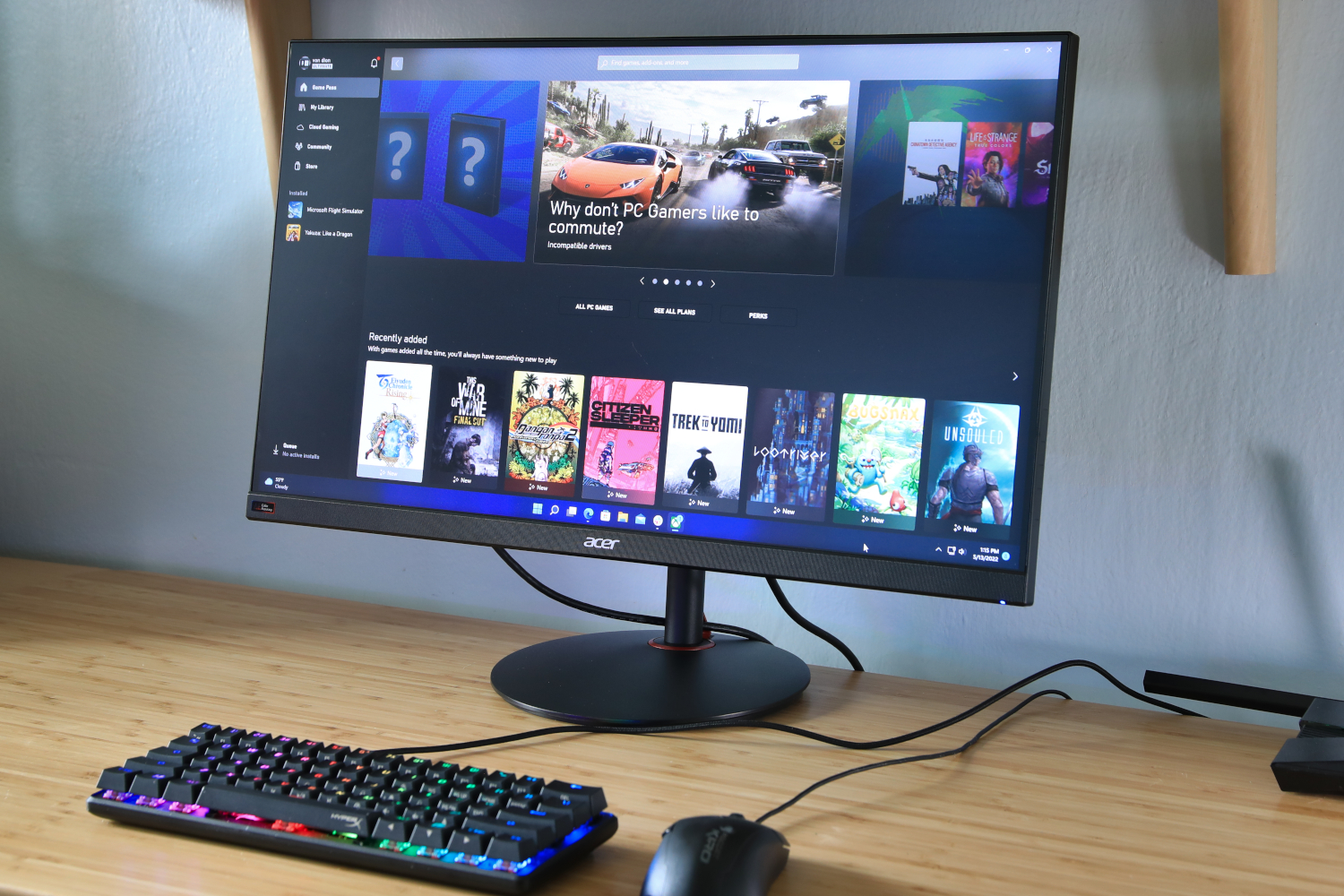 Gigabyte’s G27F 2 is a good choice for gamers who need a high refresh gaming monitor on a tight budget. The monitor’s great motion clarity and adaptive sync support make it ideal for fast-paced games that run at high frame rates.

Image quality is disappointing, however, due to limited contrast. Content with a dark presentation, whether it’s a photo, movie, or game, will appear washed out and dull. Bright images are more vivid thanks to the monitor’s high brightness and good color performance.

The G27F 2’s price offers an excuse. This is an inexpensive monitor for its category. You’ll see better results from alternatives like the Acer Nitro XV272, but that monitor has an MSRP that’s $50 higher. The Gigabyte G27F 2 is acceptable if you can’t stretch your budget that far.