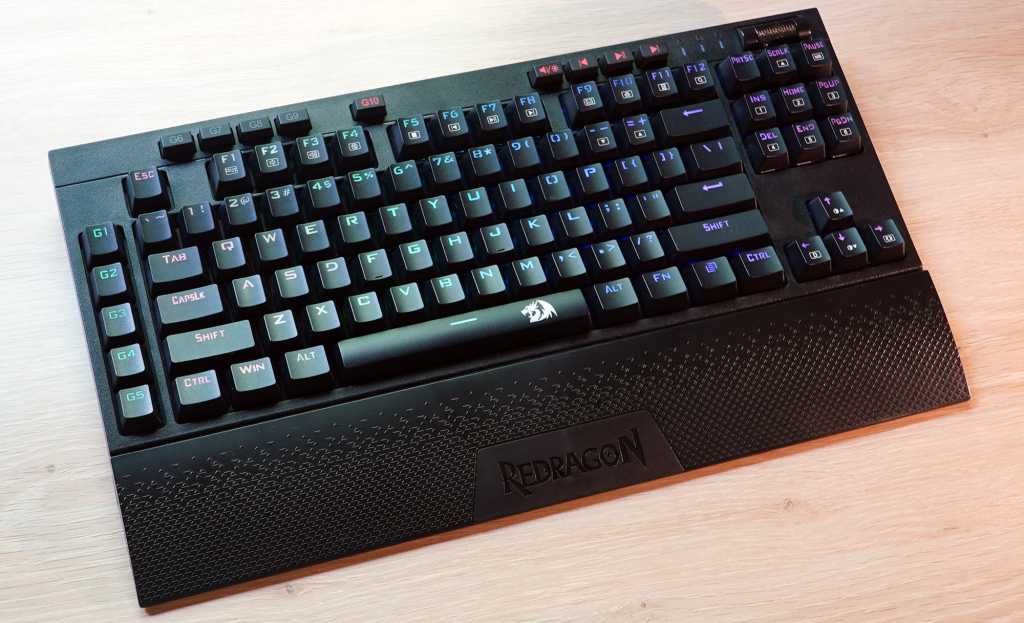 The K596 is a fantastic value for a fully wireless mechanical gaming keyboard, cramming in many of the features you’d expect from a much more expensive design. It lacks the refinement of more mainstream brands, but for the price tag it can’t be beaten.

A true PC gamer needs to have a set of accessories that are at least as expensive as their actual computer. Right? Wrong! That’s a ridiculous assertion, but one that seems to have some grounding in reality if you look at the prices of mice and keyboards marketed to gamers these days. Call me crazy, but I don’t think a new keyboard needs to cost as much as a used car payment.

Enter the dragon Redragon. This Chinese brand has been pumping out low-cost PC gaming accessories for years, and slowly but consistently improving its offerings. After growing weary of the price tags in keyboards like the Razer BlackWidow V3 Pro and Corsair K70 RGB Pro Mini, I sought out this budget brand’s best wireless competition. That’s the “Vishnu” K596, a TKL board with 2.4GHz wireless that sells for just $75 on Amazon.

The K596 isn’t amazing in any particular category, but at this price it doesn’t have to be. It’s a solid, reliable board that covers all the basics, and adds a few nice extras you wouldn’t expect at this price point, like programmability, per-key RGB, and a magnetic wrist rest. It never aspires to be more than its budget-friendly self, and that’s something I can respect.

Compared to something bombastic like the Keychron Q5 I recently reviewed, the K596 seems pretty basic. You get a tenkeyless layout, a favorite among gamers, with a few added extras. These include a trendy dedicated volume wheel (real metal, surprisingly), media keys, and 10 programmable macro keys—five mechanical on the side, in Corsair style, and five membrane keys above the main deck.

The K596 is unabashedly plastic from top to bottom, but that allows it to include some othe goodies. Inside the box you’ll get a magnetic wrist rest (always appreciated by my RSI-riddled mitts), a braided USB-C cable for charging and non-wireless operation, and a sleeve of alternative switches to try. Which is very strange, because this is not a hot-swap keyboard—I had to disassemble it and take a look at the soldering to make sure. You’ll get budget Outemu red switches and you’ll like them.

Keycaps are frankly ugly, using the standard “gamer” font for their shine-through ABS. There’s also a white printed Redragon logo on the space bar that clashes horribly with the all-black design. Fortunately you can swap out the keycaps with any aftermarket set thanks to the standard TKL layout, though you may need to get creative to fill in those five macro keys.

This is a dedicated desktop design, which means a 2.4GHz USB-A dongle and no Bluetooth. That also means that it’s not going to connect to multiple machines on its own, which is fine at this price point. I doubt a budget gamer has multiple devices that demand full keyboard input sitting on the same desk anyway.

The top edge holds the USB-C port, while the bottom has fold-out feet (single stage, but nicely covered in a bit of rubber) and an on-off switch. Not that you’ll be using the latter much. The keyboard’s battery-saving tech is incredibly aggressive, turning off LED lighting after just one minute. Redragon says the battery lasts for 10 hours, but in actual use it seems to be much, much more than that, at least measured in the time that you’re sitting at your desk and using it.

Oh, one last thing: Redragon naming this keyboard the “Vishnu” is in poor taste, and there’s no getting around it. For the uninitiated western reader, imagine someone trying to sell something called the K1337 Jesus Christ Messiah Wireless Gaming Mouse, and you’ll see what I mean. Naming your products after mythological figures is one thing, but when you name a product after a diety that a billion people are still actively worshipping, it gets awkward. Glorious, don’t get any ideas.

Typing on the K596 is…fine. I won’t lie, it’s a budget feel for a budget keyboard, and you can sense that these are inexpensive keycaps on inexpensive switches. The hall effect stems (those little boxes around the cross shape) lend some extra stability, but the barebones stabilizers rattle as much as any cheap keyboard does. This isn’t going to compete with high-end boards, and that’s okay.

The extras help the keyboard rise above its plasticky construction. The metal volume wheel is a great touch, especially now that it’s becoming such a standard feature in large board designs. The other add-on buttons along the top look like something that came out of the ’90s, but they work fine. Note that there’s a button next to the media controls that lets you flip the wheel between controlling your PC’s volume and raising or lowering the level of lighting of the keyboard itself.

I’m especially pleased to see a wrist rest included in the package. It’s not exactly a looker—that cheesy Redragon logo is front and center—but the slightly knobbly pattern is comfy for my angled typing style with feet folded out. The magnetic attachment is sturdy, an element you’d expect to see on a much pricier board.

As for gaming, the K596 works as well as any similar keyboard design, with the added benefit of on-the-fly programming (see below). Redragon doesn’t publish a polling rate, but with the 2.4GHz connection and my less-than-superhuman (just human?) reflexes, I never noticed a dip in performance. The esports crowd may not be impressed, and even I wish the keycaps were better, but the board is more than acceptable for everyone else.

Redragon offers a downloadable programming tool for the K596, which is somewhat limited. It allows for a bit of customization of the backlighting and up to five different user profiles, but programming the keys themselves is restricted to the G1-G10 keys on the top and left side, plus the media controls. I never found myself needing more than that, but if you’re used to full customization, you won’t be impressed.

What is impressive is on-the-fly custom programming. Press Fn plus any of the G keys and you can assign a single button or a string of up to a dozen timed presses. It’s something that used to be fairly common on gaming keyboards, but seems to have fallen out of fashion as driver programs have ballooned out of control. For someone who wants a handy hotkey or a simple repeatable sequence, it’s fast and easy.

It’s not perfect, though: I had to resort to the driver program to assign Ctrl to the G5 button and preserve my shortcut muscle memory. Again, this is fairly typical of cheap boards, and I’m just happy it was possible at all.

The K596 comes with a 2400mAh battery. That is, in technical terms, a big ol’ chonker: Most keyboards come with around 1000mAh or less. Combined with that aggressive and hard-wired one-minute timeout, I haven’t been able to hit the keyboard’s claimed 10-hour battery life in more than a week of gaming and working. Expect to spend almost zero time plugged in, even with the additional “gamer flair” of little LED vents on the side of the keyboard.

If you can get over the tasteless name and even more tasteless dragon branding, the Redragon K596 is an incredibly solid wireless keyboard for the price. Though I wish it had modular switches for more customization, the extras and programming tools it includes more than make up for that lack. (And really, expecting hot-swap switches at this price might be a little much.)

For those seeking a budget-friendly alternative to ballooning gaming keyboard prices, especially in the wireless niche, it’s hard to go wrong with this sturdy hunk of plastic. Just find some better-looking keycaps if you can.