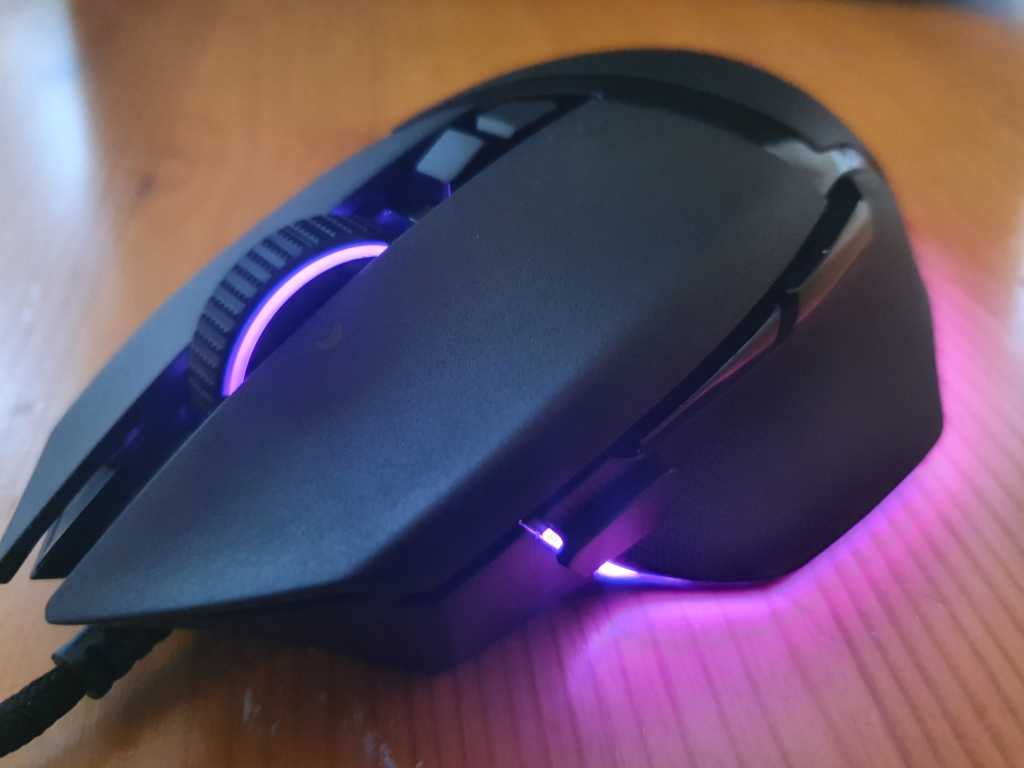 The Razer Basilisk V3 has something special in store for just about every gamer, including excellent performance, tons of comfort, buttons galore, and an intuitive multifunctional mouse wheel that optimizes your scrolling.

While some budget gaming mice weigh less and are less bulky than the Basilisk V3, few have as many premium features—making it one of the most versatile budget mice you can get. Standout features include a faultless 26,000 DPI sensor, a multifunction scroll wheel with extra AI scrolling modes, and an ergonomic thumb rest that’s both comfortable and practical.

Add to that the V3’s generous contingent of 11 buttons with the option to double the number of commands at your beck and call with Razer’s Hypershift technology, and it’s clear that in the V3 we have a mouse that exceeds expectations.

Looking back on gaming mice releases over the last two years, it’s hard to think of a mouse that felt more luxurious than the Razer Basilisk V2; its gentle right-handed contours and slightly arched thumb rest fitted the palm like few mice ever did, providing more than just a rudimentary control. To use an equine analogy, the V2 was like a noble ‘steed’ that you might proudly ride in your favorite games, rather than one that you simply gripped onto and hoped for the best.

But now that Razer has discontinued the V2, the time has come for something better and the Basilisk V3 can lay claim to being just that.

The V3 is cut to exactly the same mold, sharing the V2’s dimensions and weight (5.11 x 2.36 x 1.65 inches and 101 grams), but building on its legacy with a number of upgrades—most of these centered around the mouse wheel. Consequently, it sports a familiar feel, best suiting medium to large hands and palm grippers who will best make use of the full-handed design, 11-button functionality, and comfortable left-side thumb rest for an easy and comfortable fit.

That said, comfort plays a big part in the Basilisk V3’s appeal as it did in the V2, albeit in the same way Platinum Class movie seats feel to movie goers; their padded leather finishes and reclining foot rests aren’t things you necessarily need, but, by Jove, they feel great to have.

The V3’s thumb rest just feels plain nice. It also gives you plenty of leverage, preventing thumb friction and enabling you to make exceptionally quick flicking movements in games. But it does more than just that; by sitting compact against the mouse’s body, it also provides easy reach to the three left-side buttons—two above, and one at the top of your thumb, allowing you to fire off multiple commands in just a few microseconds.

The inclusion of the thumb rest also gives the mouse a very premium look and feel, being something that most gaming mice don’t offer. That up-market look is accentuated by the injection-molded grip that covers it with hundreds of tiny indentations. These indentations hold your thumb fast, sans the cheap, rubbery feeling you sometimes get with mouse grips. A second grip decorates the mouse’s right flank, the two sides contrasting nicely against the matte-black textured body like decals on the sides of a fighter jet.

Then there’s the lavish RGB lighting, the main bar of which also looks kind of jet fighter-ish. It illuminates the surface beneath the mouse rather than popping light upwards straight into your pupils—reminiscent of the landing light on an airplane. This means the Basilisk V3, while attractive at day, really comes to life at night, beaming light from all sides. The logo and mouse wheel also light up and these three components split into 11 customizable zones that let you go to town with color combinations.

The Basilisk’s premium feel extends into the mouse’s center too. Sizing up the right-side main clicker against the left one reveals a front-side overhang on the right to accommodate your elongated middle digit. This again mostly benefits palm grippers who will enjoy stretching out their fingers further than they otherwise would in ambidextrous mouse.

But the feature Razer wants us to really be wowed by is the V3’s mouse wheel. The mouse wheel itself is big and weighty, cutting the two main clicks in half with its imposing size. Razer calls it a HyperScroll Tilt Wheel, and it has two main benefits.

The first is its four-directional scrolling capability that lets you scroll forwards and backwards, but also left and right. The second is the addition of two modes that change the V3’s scrolling behavior: Pressing the button behind the wheel lets you switch between a Free-Spin Mode, which allows you to scroll more smoothly in browsers or initiate repeated game commands, or a Tactile Mode, a notched scrolling mode that allows you to stop scrolling precisely at a point.

The addition of these modes is by no means a coup by Razer, with mice like the Logitech G500 also sporting their own scroll modes, but it’s further acknowledgement that mouse wheels are getting increasingly important to gamers as they find more uses for them in fast-paced games.

Behind this button you’ll find the DPI preset button that allows you to easily switch the V3’s DPI sensitivity on a dime, while on the mouse’s underside, a solid contingent of 100 percent PTFE skates—including a large one below the thumb—work together to prevent any friction. In front of the rear-most skate is another programmable button that lets you seamlessly switch between your custom profiles in an instant.

When it comes to software support, the Razer Basilisk V3 uses the Razer Synapse app. These days, the devil is in the details when it comes to personalization, with some apps going the extra mile, while others really just touch the tip of the iceberg to deliver the tailor-made experience. Thankfully, Synapse fits in the former category, letting you tinker—in miniscule detail—with options like mouse sensitivity, polling rate, RGB lighting, and surface calibration.

Changing DPI sensitivity, for instance, was an exercise in exactness. In addition to clicking on the supplied presets, I could also set the number of sensitivity stages (or increments) up to a maximum of 5 and the individual DPI sensitivity of each of these increments. Using this feature, I set up a profile of five increments for CounterStrike: Global Offensive—the third and fifth of which were calibrated around the 400 DPI mark. This made it much quicker to toggle between DPI presets for precision aiming and back to the other more manic ones I need for spraying and praying.

As expected, Synapse let me assign macros and commands to buttons and save profiles for my go-to games, desktop programs, and Windows. The customize tab is presented via an intuitive visual map that saves you from having to figure out where all the buttons lie. You can also make use of a neat feature called Hypershift, which allows you to assign a secondary set of functions on top of your existing button assignments, thereby doubling the commands at your beck and call.

Synapse aces personalization for the V3’s scroll wheel too. You can toggle between the Tactile and Free-Spin modes in the app, but you can also activate another option called Smart-Reel, which automatically triggers Free-Spin when you flick the mouse wheel with your finger.

This last option takes a little getting used to, requiring you to remember to flick and then listen out for the audible click that indicates when the V3 has shifted modes. Once perfected, though, this feature allows you to speed up scrolling without even having to tinker with software or touch any buttons.

Razer Smart Tracking, which determines the Basilisk V3’s surface calibration is well optimized for a mouse mat right out of the box, but for precision control of lift-off distance, Synapse has a manual calibration that lets you select your ideal distance – between 1-3 mm. Additionally, if you’re the kind of gamer that likes to change surfaces, say from your mouse mat to a wooden table top, you can create tailor-made calibrations for those surfaces too.

Last and not least is the app’s control of the Razer Chroma RGB lighting. In a nutshell, it’s very comprehensive, giving you many interesting ways to change the RGB exactly how you like it, including applying a multitude of effects and even syncing the RGB to the audio of around 150 supported games.

The Basilisk V3 makes use of Razer’s latest Focus+ infrared optical sensor which provides a DPI sensitivity of up to 26,000 DPI and tracks up to 650 inches per second when used in in conjunction with the Razer Synapse software.

The sensor’s 26, 000 DPI is a slight upgrade from the V2’s 20,000 DPI offering, and, considering the V3 currently ships for just $70, its inclusion in the V3 is great value. It provides essentially more sensitivity than any gamer would need – be they an esports professional or a causal gamer. In fact, for most games, I had the V3 set to just 800 DPI which proved fast enough for decent performance. The buttons, which feature second generation Razer Optical Switches, also responded very quickly.

Giving the mouse a test run in Insurgency revealed the tracking to be virtually faultless. The V3 had no trouble drawing straight, smooth lines without any observable jitter. The V3’s acceleration was also spot on, the mouse mapping directly to the distance of my cursor movements. Plus, there was also virtually no lag when I spun around, or made large sweeping movements.

When it came to the overall feel of the mouse in my hand, the V3’s broad, large shape felt easy to move and gave me more precise control of quick movements allowing me to settle my crosshairs on targets a little quicker than I normally would. Although, if you’re coming from using a smaller mouse, as I was with the Logitech G203, the V3’s heftier size and 101g weight may take a bit of getting used to, as it did with me.

Although my use of Free-Spin Mode and Tactile Mode was mainly limited to browsing, the scroll wheel still proved very useful in games, responding well to my prompting. I mainly used it to switch weapons and to jump-hop away from incoming fire, which freed up buttons for other commands.

Yet another scroll wheel personalization, Scroll Acceleration, also proved a winner. It sped up scrolling in browsers in proportion to how fast I flicked the wheel, thereby cutting down the time it took me to reach the header or footers of websites. For content creators the advantage of this is obvious—it’ll save them a stack of time in spreadsheets or lists, when wading slowly to the very end is the only other option.

If I could pick one main drawback from my time using the V3, it’s that it’s a bulky wired mouse, which means it’s not the most portable. If, like me, you’re frequently carrying around and changing devices, that can get a little inconvenient after a while, but on the whole, it’s a small price to pay for a mouse offering this much functionality.

The Razer Basilisk V3 is an outstanding right-handed gaming mouse in Razer’s line-up, offering both competitive and casual gamers the benefit of a multifunctional scroll wheel and generous selection of 11 programmable buttons. Although it’s a little weighty and bulky, the V3’s performance is commendable thanks to its sporty 26,000 DPI Razer Focus+ sensor, buttons featuring second-generation Razer Optical Switches, and an ergonomic and comfortable design.