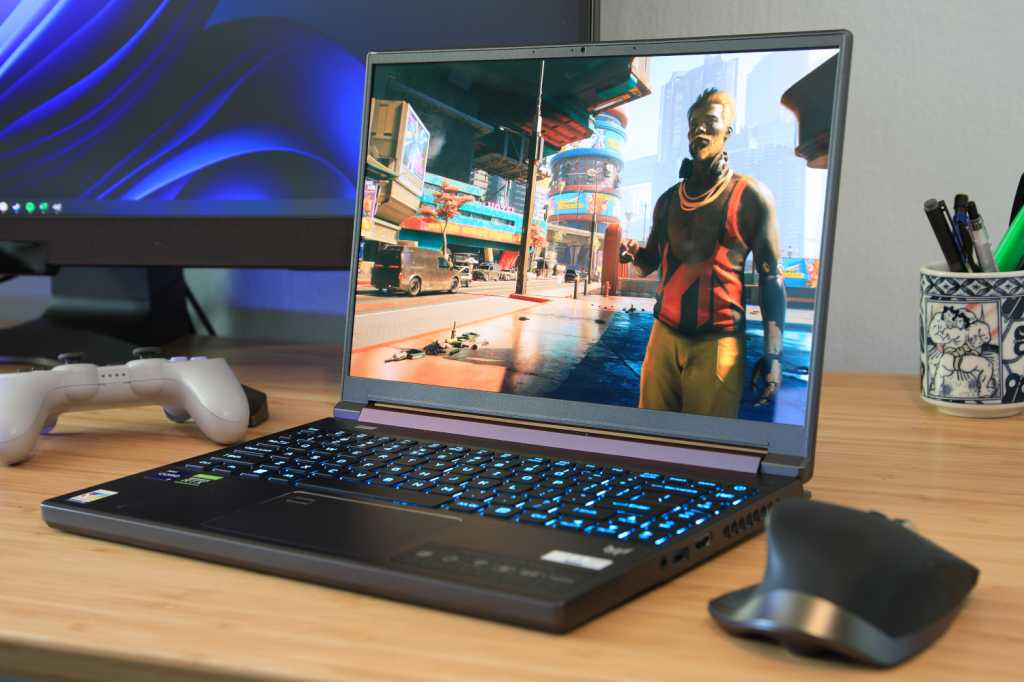 It’s hard to walk two feet without tripping over a new laptop with an OLED display, and Acer’s Predator Triton 300 SE is the latest to join the fun. Though largely similar to last year’s model, the latest Triton 300 SE pairs the OLED screen with a leap to Intel 12th-gen Core graphics. This leads to impressive processor performance — but I thought this was a gaming laptop? While the display is drop-dead gorgeous, the keyboard and graphics performance were nothing to write home about. Read on to learn more.

The Acer Predator Triton 300 SE OLED is essentially a special model of the Triton 300 SE, and the changes go beyond the display. This small laptop goes big on multithreaded performance with an Intel Core i9-12900H processor. It also packs in 32GB of DDR5 memory and a 1TB solid state drive.

So far, so good, especially at the laptop’s $1,949 MSRP. There is one component, however, that’s decidedly mid-range: the Nvidia RTX 3060 mobile graphics chip. It’s certainly the weakest link in this laptop’s chain of otherwise impressive hardware.

The Acer Predator Triton 300 SE OLED is a handsome, workmanlike laptop. Rugged lines and sharp angles hint at the laptop’s gaming intent, but the use of subdued gunmetal panels and small Predator logos keeps flair to a minimum. It splits the difference between gaming and professional design which, given its beefy processor and small footprint, makes sense.

I like the look, but I have a few nits to pick. The laptop’s materials are attractive on their own but the color of different laptop panels can vary. I found the hinge often appeared more blue than the interior panel below it, while the touchpad is yet another shade of gray. Details like this cut against the model’s “SE” branding (which presumably is meant to stand for Special Edition, though Acer never mentions this in its marketing).

The laptop feels solid in day-to-day use and body panels resist flex while typing or using the touchpad. A slight warp is visible when holding the laptop from one corner, but only just, and the chassis emits no groans in protest. There’s obvious flex in the display lid, however, which wobbles as the screen is open or closed.

This is a 14-inch laptop with a small footprint. Display bezels are very slim on the top and sides and not excessive along the bottom. The Triton 300 SE is noticeably smaller than the Alienware x14, which has a large display chin and bump-out on the rear of the chassis. Asus’ ROG Zephyrus G14 is a few fractions of an inch thinner and a few grams heavier.

The Predator Triton SE has a spacious layout that takes up most of the 14-inch laptop’s limited interior space. Key caps are large and most keys are full-sized (or very close to it). Key feel is decent, too, with good travel and some tactile response when activated.

Acer makes some odd choices, however, and they drag down the experience. The layout includes a column of function keys on the right side. These push the entire keyboard to the left. Acer also huddles the function keys into groups of four which, once again, changes their location. I found myself hunting for keys while touch-typing.

The touchpad measures about four inches wide and two and a half inches deep. This is typical for a small gaming laptop but feels cramped all the same. The limited space can make multi-touch gestures more difficult and left me feeling twisted while navigating the desktop.

It’s a mix, then, but I do prefer the Acer Predator Triton 300 SE OLED to Alienware’s x14, which has an even smaller touchpad and less pleasant keyboard layout. The Asus ROG Zephyrus G14 is more similar to the Triton 300 SE OLED but has a better layout, as it doesn’t have a column of media keys pushing the keyboard off-center.

Acer delivers a gorgeous 2880 x 1800 OLED display in this version of the Predator Triton 300 SE. This is the major difference between the OLED model and its less expensive siblings, which have a 1,920 x 1,200 LCD display. But wow — what a difference.

Sharpness is great, too, thanks to the display’s high resolution. Pixel density works out to about 242 pixels per inch, which is similar to pixel density of an Apple MacBook Pro 14 and 50 percent better than the 1920 x 1200 LCD. Individual pixels are difficult to pick out and games look crisp.

All Predator Triton 300 SE models have a 16:10 display, which offers more vertical space than a 16:9 widescreen. This has become a trend after years of 16:9 dominance, and it’s a positive change. It’s a tad easier to fit multiple windows on a 16:10 display. Games with a busy interface, like strategy titles and MMORPGs, benefit from the extra space.

The OLED display’s refresh rate goes up to 90Hz. This is less than most gaming laptops with an LCD display, which typically have a refresh rate between 144Hz and 240Hz. But let’s be real: most laptops can’t drive refresh rates that high in modern games. Even 90Hz is asking a lot.

Nvidia G-Sync is also missing, so screen tearing can be an issue when V-Sync is turned off.

Audio quality isn’t as good, however. The speakers have plenty of volume and sound great in less complex content, like podcasts, but games and movies can muddy the sound. I noticed that busy audio sources, like a raging river or nearby waterfall, had a metallic, sizzling quality that seemed more like digital static than an organic noise.

The Predator Triton 300 SE OLED surprises with a 1080p webcam that provides decent video quality. Video appears crisp and vivid. Bright light sources can throw the auto-focus off kilter and a dark room will lead to grainy video, but overall quality is much better than average for a gaming laptop.

Microphone quality is less impressive, with a tinny, hollow presentation and a limited ability to pick up audio that’s off-axis. While this helps with eliminating background noise, it also caused my voice to sound too quiet when I wasn’t facing the laptop.

A fingerprint reader is included in the touchpad. It’s on the left, rather than the right, which southpaws should appreciate. The fingerprint reader works as well as any other, providing fast logins in most situations but hanging when my finger was a bit off the mark or damp. There’s no IR camera, facial recognition login isn’t supported.

The Predator Triton 300 SE offers a modest selection of connectivity. It includes a Thunderbolt 4 / USB-C 4 port with Power Delivery and DisplayPort Alternate Mode, plus two USB-A 3.2 ports, for a total of one Thunderbolt / USB-C and two USB-A.

The Thunderbolt / USB-C port can charge the laptop but doesn’t provide as much power as the 180-watt power brick, so performance may be limited while using USB-C and the battery may discharge. This is normal, as most USB-C typically maxes out at 100 watts of power (a newer 240-watt Power Delivery standard exists but remains rare).

Video connectivity is provided by either the Thunderbolt 4 port, which offers DisplayPort Alternate Mode, or a full-sized HDMI 2.1 port. It’s good to see Acer opt for HDMI 2.1, as it allows better refresh rates and resolutions on external displays. A 3.5mm combo audio jack provides support for headphones or microphones.

But that’s it. There’s no physical Ethernet port and no dedicated DisplayPort or Mini-DisplayPort. These omissions could sway many towards using a Thunderbolt 4 / USB-C dock or hub to expand connectivity. A barrel plug provides power from the 180 watt power brick.

The ports are located on the laptop’s flanks, not the rear, and positioned about halfway between the front and rear of the laptop. This could be an issue when docking the laptop, as it makes cable management more difficult. It’s also a problem when using an external mouse alongside the laptop, as cords from connected devices may occupy the space users will want to place the mouse.

PCMark 10 provides a strong result for the Predator Triton 300 SE OLED, though there’s room for debate.

Cinebench R20, on the other hand, gives Acer an obvious win. The Core i7-12900H led it to a score of 6,121, which is several hundred points higher than the Alienware x14 (though it, admittedly, only had the Core i7) and way better than the AMD-powered alternatives. This shows the Predator Triton 300 SE is a strong choice for multithreaded workloads.

It’s the same story in the Handbrake test, which transcodes a 4K trailer of Tears of Steel. Lower is better in this test, and the Acer breezes through the workload much quicker than either AMD-powered alternative.

In fact, while not shown on this chart, the 14-inch Predator Triton 300 SE is only a tad behind a bulk of 15-inch and 17-inch laptops we’ve tested with 12th-gen Intel Core i7 or Core i9 hardware.

Processor performance is only part of the story, however. This is a gaming laptop, so it needs to game.

Unfortunately, 3DMark does not lead to a strong start. The Acer comes in behind all the alternatives, including the Alienware x14, which uses Nvidia RTX 3060 graphics but has a lower power limit of 75 watts.

Metro: Exodus: Enhanced Edition throws Acer a bone. The Predator Triton 300 SE and Alienware x14 almost tie in this test, with only one frame per second separating them. This shows more demanding titles can still bring performance down to 30 frames per second, requiring a move to lower settings if 60 fps is desired.

Performance can be improved by opening Acer’s PredatorSense software and switching the performance mode from Default to Extreme or Turbo. This does improve results: Time Spy rose from 7,846 to 8,588. This comes alongside screaming fans and high surface temperatures, both of which makes the laptop unpleasant to use.

I can’t imagine using the laptop day-to-day in either Extreme or Turbo, but they may be useful if you plan to start a 3D render or video encode and leave for dinner.

A modest 78 watt-hour battery powers the Acer Predator Triton 300 SE. This is large for most laptops but not large for a high-performance machine. Alienware’s x14 has a larger 80 watt-hour battery. Asus’ ROG Zephyrus G14, on the other hand, has a smaller 76 watt-hour unit.

Acer has a secret weapon, however: switchable graphics. This feature, which isn’t present on all gaming laptops, falls back on Intel’s Iris Xe graphics when the Nvidia RTX 3060 would be overkill.

This is good news if you want a gaming laptop that can also be used while traveling. To be clear, gaming will engage the RTX 3060 graphics chip and slash endurance. If you stick to web browsing or video, however, the Predator Triton 300 SE can handle a cross-country flight.

The Acer Predator Triton 300 SE OLED has potential. It’s a compact yet powerful laptop with an excellent display and decent battery life. Pricing isn’t terrible, either, with an MSRP of $1,949. That’s not inexpensive, but it’s reasonable for a laptop with 32GB of RAM and a 1TB solid state drive.

Graphics performance lets the laptop down, however. Nvidia’s RTX 3060 is a fine mid-range mobile graphics solution, but the Predator Triton 300 SE’s price puts it very close to premium territory. Even Alienware’s x14, which I tested at $1,999, managed to squeeze ahead, and the ASUS ROG Zephyrus G14 is just flat-out superior in games.

The Predator Triton 300 SE OLED is a much better laptop for content creators than it is for gamers, even though it’s sold as a gaming machine. The Intel Core i9-12900H processor and vivid, color-accurate display make it great for those who want a compact Windows laptop for photo or video editing. If you just want to game, though, the Alienware x14 or Asus ROG Zephyrus G14 should prove a better choice.