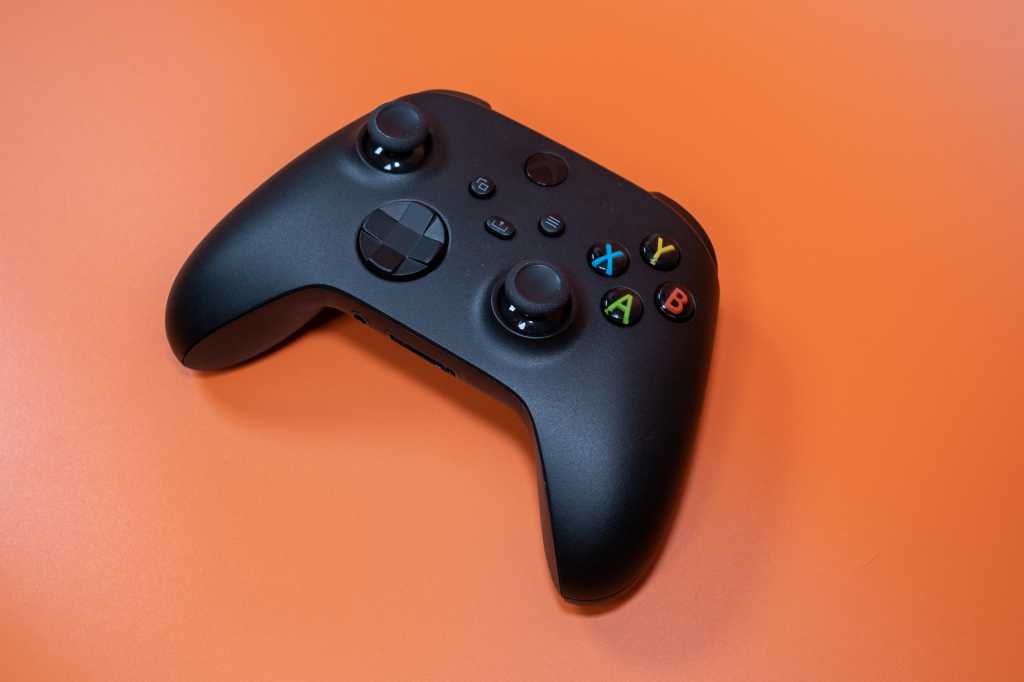 Microsoft has been making game controllers for more than 20 years, and it’s settled on a basic formula. Thus, the latest revision of the iconic Xbox controller isn’t so much a revolution as it is an evolution. The 2020 Xbox Wireless Controller ships with the Xbox Series S and Series X, but it works almost as well on other devices, and the design is subtly improved from the Xbox One-era gamepad. The result is an excellent, well-supported controller you should consider no matter how you game.

Microsoft made an already excellent game controller even better with strategic tweaks to the buttons, shape, and USB port.

If you’ve held an Xbox controller in the past decade, the latest revision will feel familiar. However, Microsoft tweaked the geometry of the controller a bit, so accessories you had for older controllers may not fit perfectly. This, along with a few millimeters shaved off of the triggers and shoulder buttons gives the 2020 refresh a less bulky body.

The grips are smooth on the top, but the underside and the triggers have a subtle dot texture to make it more secure, even if your hands get sweaty in the midst of an intense gaming session. The bottom edge sports the standard Xbox expansion connector, as well as a headphone jack. On the top, we see one of the most important changes: a USB-C port to replace the micro USB on older controllers. This newer standard is more durable and makes connecting to non-Xbox hardware easier. I also applaud Microsoft for including a long eight-foot USB-A-to-C cable with the controller.

The thumbsticks are asymmetrical, with the left stick higher than the right. They both have concave tops, whereas the second-gen Xbox Elite Controller has one convex stick that’s better for fine aiming. The d-pad is below the left stick, and the ABXY button cluster is above the right stick. The d-pad has gotten a long-overdue overhaul with this unit. The control is now dish-shaped with a raised section in each of the cardinal directions, making it easier to hit diagonal directions. On the flip side, the rim collects skin oils and dust, requiring frequent cleaning to keep it looking tidy.

All these buttons, along with the bumpers and triggers, are easy to press without shifting your grip, but there are some lesser-used controls grouped toward the middle. The traditional view, menu, and Xbox/power button are all present, but the 2020 revision adds a share button.

The battery door is on the back, and this compartment is empty out of the box. It still runs on AA batteries, but there’s a rechargeable battery pack available for $25, which is a significant chunk of the controller’s $60 price tag. With that accessory, you can use the USB-C port to recharge the device. Otherwise, it’s only for wired connectivity. Sony’s DualSense, on the other hand, has a built-in rechargeable battery.

Microsoft says that the gamepad is faster than all its previous incarnations when connected to a Series X or S console thanks to a feature called “Dynamic Latency Input.” This system polls the controller more often to transmit your presses without delay. Even when connected to other devices over Bluetooth, we found the controller to be perfectly responsive.

The share button is pretty handy, if you care to reach over to it in the dead center of the gamepad. On the Xbox, a single tap takes a screenshot and a long-press records a 15-second video clip. On Windows 11, it works the same, but that’s a relatively new development. At launch, Windows 10 didn’t understand the button at all. As for the Xbox button, Windows links that to the Game Bar, which includes controls for screen capture, performance monitoring, audio, and more.

You won’t find any advanced technology in the triggers—Microsoft seems to have upped the resistance a touch, which can make it easier to find the sweet spot in games that use the trigger as a throttle, but it can be fatiguing to hold them down for long periods. Sony has Microsoft beat here; its DualSense controllers can vary the amount of resistance to increase gameplay immersion. The Xbox controller’s thumbsticks have just the right resistance, though. They’re precise, smooth, and they snap back to center quickly with no bounce.

The new “hybrid” d-pad isn’t as elaborate as the larger circular pad on the Elite model, but it’s still a welcome improvement over older models. It’s a vast improvement for games (like fighters) that rely heavily on the d-pad. The mushiness of the cross-style d-pad is gone, but that tactility adds a bit of noise. The same high tactility carries through to the other buttons—there’s never any question if you’ve pressed a button hard enough for it to register, but it’s loud. A new controller with unmashed buttons is bound to be a little more clicky, but even comparing the updated Xbox Wireless Controller to a lightly used 2016 variant, the new design is noticeably louder. If you’re gaming around others, they might get annoyed with the more audible clicking.

Naturally, the controller launched alongside the Series X and S and is designed to work perfectly with those consoles. However, it works with computers, phones, and other gadgets over Bluetooth. That means you won’t get a USB dongle in the box—this unit can connect directly to a multitude of devices.

To pair with new devices over Bluetooth, simply long-press the pair button next to the USB-C and select it on your phone or PC. You can also double-tap that button to move the controller back to your Xbox (if you have one). If you don’t want to bother with Bluetooth, the spiffy new USB-C port lets you wire the controller to your PC, and it should work with any spec-compliant USB-C cable—we successfully tested it with both A-to-C and C-to-C cables.

Windows has built-in support for the Xbox controller, so there’s no setup or apps needed. You can also pair with macOS to play games, but it won’t have the same system-level integrations from Windows like the Game Bar, audio output, or firmware update support.

Android and iOS added support for Xbox controllers several versions ago, so this is also a straightforward experience over Bluetooth. Microsoft’s support page claims that Android phones cannot connect to the controller over USB, but we can confirm that does work in Android 12. You don’t even need batteries in the controller, making this a useful feature for on-the-go gaming.

The Xbox Controller with USB-C feels like a solid improvement over older versions. The improved d-pad, slimmer chassis, and USB-C port are the big changes here, and they all help to improve the experience. Oh, and there’s a share button. Yes, the 2020 Xbox controller plays it safe. We would have liked to see Microsoft push the hardware further with features like an integrated rechargeable battery and microphone—both features that are available on the DualSense 5.

Even if you’re not a console gamer, the Xbox controller could be just what you want. With Bluetooth connectivity, it’s a snap to set it up with a PC or phone. If your batteries get low, you can use the new USB-C port to connect the old-fashioned way, too. When you do get connected, you’ll find the Xbox controller is supported perfectly in Windows, and it works almost as well on smartphones.

You get a lot for the $60 asking price, and that makes the $180 Elite controller a much tougher sell. Unless you need those extra paddle buttons, get the standard wireless controller.