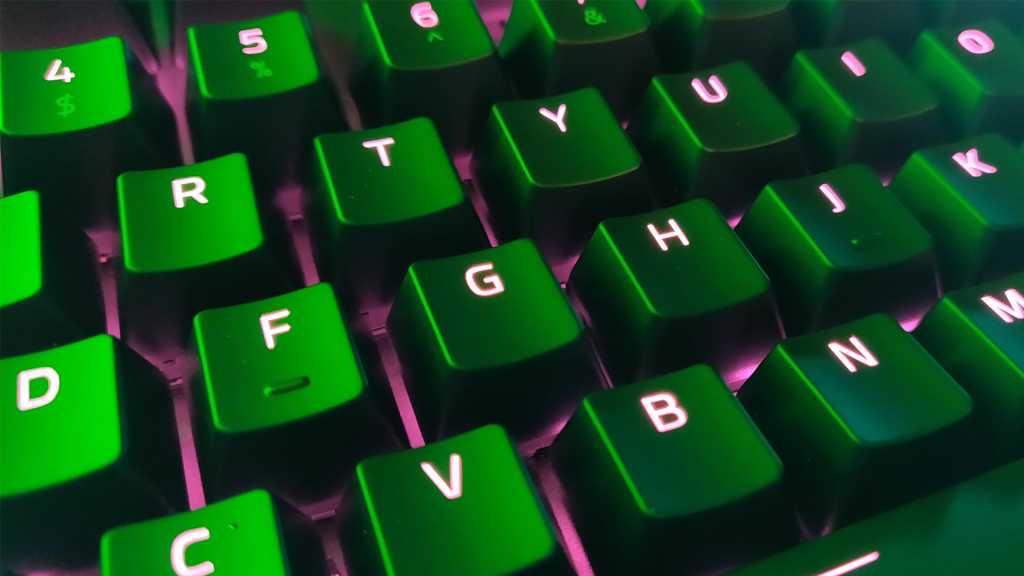 Not so long ago, using anything wireless with a PC gaming setup was a small heresy. Gamers terrified of their inputs, um, inputting even thousandths-of-a-second slower put their trust in good old-fashioned copper wiring. But these days wireless keyboards abound, as do designs made specifically for PC gaming. And unless you’re some kind of computer yourself, you won’t be able to tell the difference in performance.

Wireless gaming keyboards do tend to be on the expensive side, even more pricey than their wired progenitors. So if you’re going to get one, it makes sense to do a little research to ensure you are getting the best wireless gaming keyboard for your needs. Or go for a budget model—because frankly, gaming gear from the major names is often ridiculously overpriced anyway. 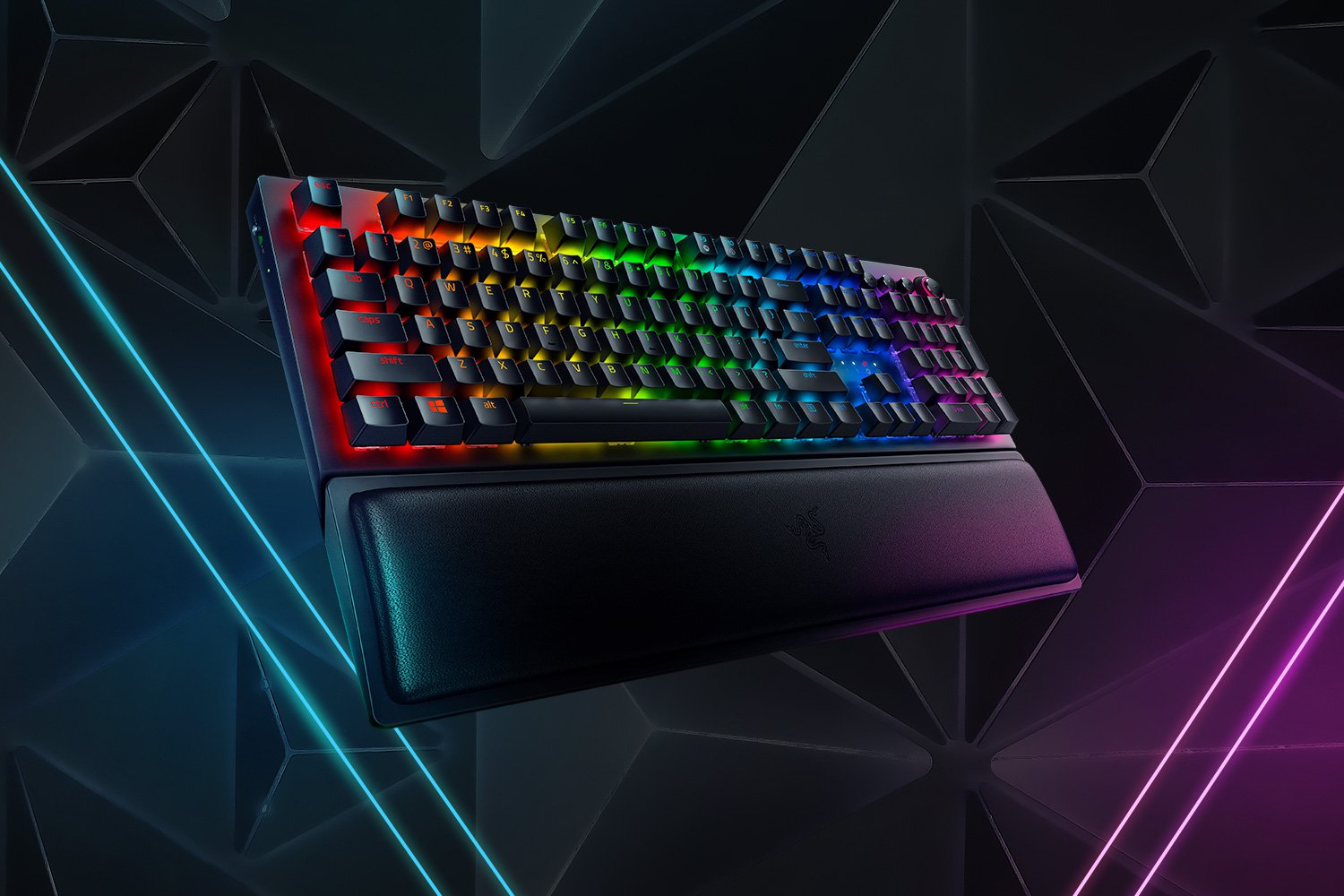 The latest in a long line of high-end keyboards called BlackWidow, this particular model pulls out all the stops. In addition to dual Bluetooth and RF wireless for multi-device connectivity, it comes in a full-size frame with a 10-key area and robust media controls. Razer’s typical light show is on display, but the real star is the switches, high-quality hall-effect designs that come in smooth linear (yellow) or loud and clickly (green) varieties. The package includes a comfy magnetic wrist rest, as it should considering it’s one of the most expensive gaming keyboards on the market.

Those looking for the tiniest gaming keyboard around might have to squint a little to see the diminutive K70 Pro Wireless Mini. This 60% design is as small as mainstream keyboards come while still packing in full high-end functionality, including hot-swappable switches for the ultimate in mechanical customization. (Even though the included “speed silver” switches are already pretty great. The keyboard includes a dazzling light show and both RF and Bluetooth wireless, as well as a secondary space bar for even more bling. Just be aware that you’re paying quite a lot for this board, and that some may find its programming options lacking, especially for a super-small design. 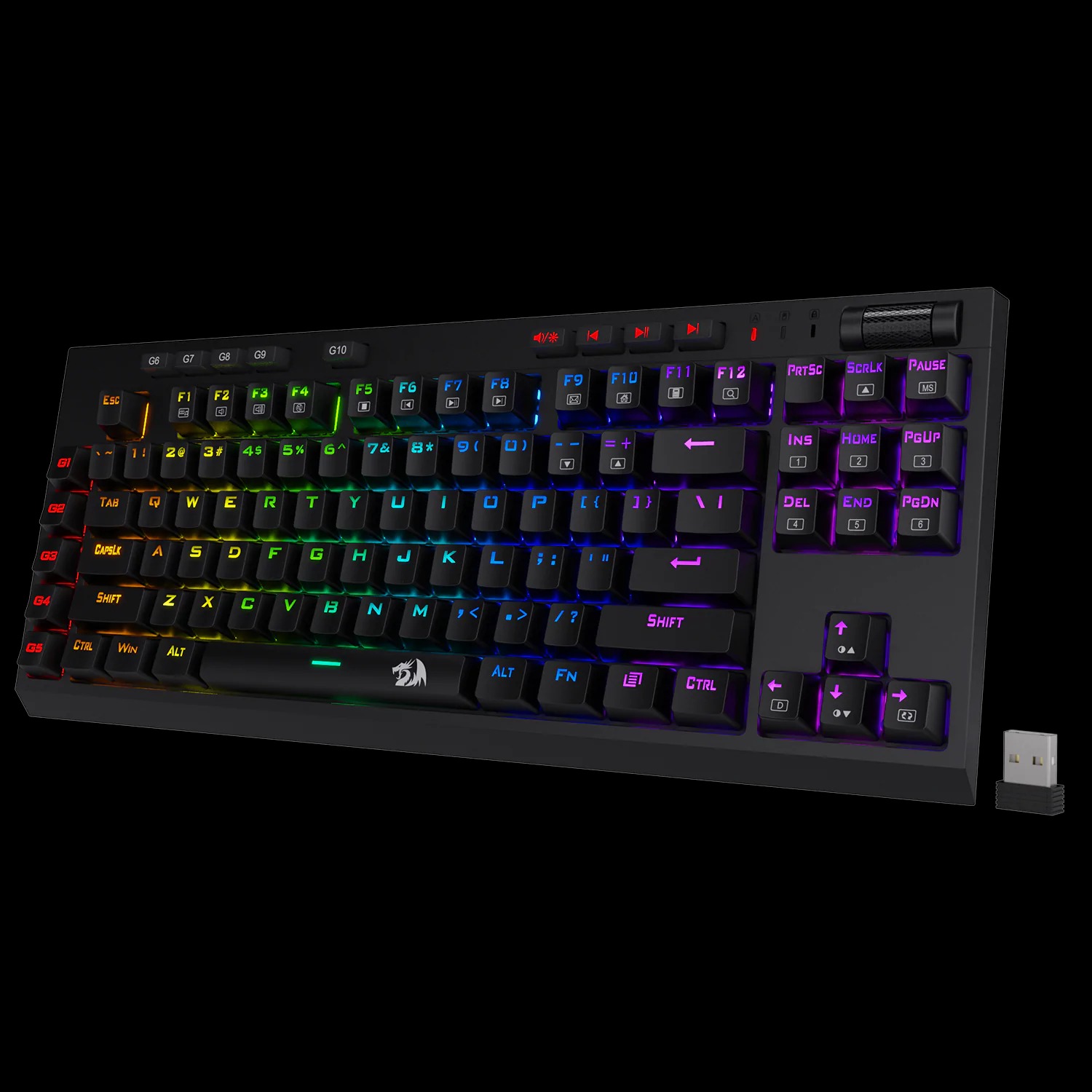 If you need a wireless gaming keyboard for under a C-note, Redragon (pronounced “re-dragon,” maybe, who knows?) is happy to provide. While this model lacks fancy features like multi-device Bluetooth, it includes a few that you wouldn’t expect at this price point, including a volume wheel and an included magnetic wrist rest. It also has a surprising focus on gaming functionality: Custom “G” buttons can be bound to individual functions or macros on the fly. The ABS plastic and branding aren’t exactly gorgeous, but you can use the money you’ve saved to grab some custom keycaps. 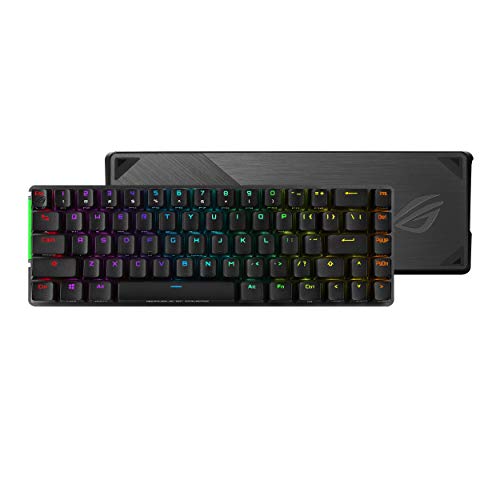 The Asus Falchion is another small keyboard, but its inclusion of arrow keys makes it a bit more comfortable and practical than a 60% design. The Falchion has a few touches that make it a superior board for on-the-go gaming, namely the touch-sensetive volume slider on the side and the included protective carrying case. Its RF-only wireless should cut out lag for mobile sessions, though you might need a USB-A-to-C cable (not included) for tablets or phones. The long battery life means you won’t be hunting for a charge when a session breaks out.

What to consider when shopping for a wireless gaming keyboard

Pardon me for being obvious, but wireless keyboard shoppers should care about the same things they would for a regular keyboard…only wireless. Expect to pay a significant premium over wired designs, at least when looking at multiple models from the same category or brand. More personal and subjective features, like the feel of mechanical switches, might necessitate a trip to your local electronics store (or tracking down a handy key switch tester for trying dozens at once).

Gaming keyboards tend to use RF wireless with a USB dongle, instead of a Bluetooth connection, which is more popular with modern “standard” wireless keyboards. That’s because it allows manufacturers to use a more reliable, direct connection, with a higher polling rate—that means the connection between the board and your computer refreshes itself much more often, minimizing input lag. Some advanced models still include Bluetooth, along with fancier options like pairing multiple devices to the same USB dongle. Range typically isn’t a concern if you’re using a keyboard with a gaming desktop, but you might want to think about it if you have a gaming PC hooked up to your TV.

Most high-end wireless gaming keyboards can also use a direct wired USB connection, if you’re worried about wireless interference in a crowded environment.

Modern mechanical keyboards come in a staggering array of switch varieties, from smooth and linear to loud and clickly, with tons of options for mechanisms and spring strength. The only real way to know which one you prefer is to try ’em out (retail store displays are great for this). That being said, more expensive keyboards tend to come with nicer, high-quality switches from name brands like Cherry and Gateron. For the ultimate in customization, track down a keyboard with hotswap switches, which let you swap out the switches for new and different ones whenever you want.

Recently more advanced types of switches have emerged, like optical and “laser” switches tripped by interrupting a beam of light, or “mag lev” switches that allow you to adjust the force it takes to activate the key. These are interesting, but tend to lack actual utility (unless you have truly superhuman perception), and increase the price of keyboards phenomenally.

Keycaps are the little pieces of plastic that sit on top of the switches—what your fingers press down on. Switching out the keycaps for a set of nicer ones, maybe made of better PBT plastic or themed after your favorite TV show, is a popular and easy keyboard mod. Some keyboard makers even sell their own upgrade sets. Keycaps with a Cherry MX-compatible stem will work with almost all modern mechanical switches, just make sure you find a set that matches the layout of your keyboard.

Unlike gaming mice, battery life generally isn’t a big concern with gaming keyboards. They’re big enough that there’s plenty of space for internal batteries that last for weeks, or even months, between charges. That is, unless you over-use that fancy RGB lighting with dazzling animation…in which case, it might last just a few days or hours. If it’s available, check the milliamp-hour (mAh) rating for the battery.

The layout of the keys on your keyboard varies more than you might think. Full-sized keyboards include a 10-key area to the right of the arrow cluster, but gaming models often omit this in order to make more room for mouse movements, calling this the “10-key-less” layout. Some keyboards go even smaller, with 60% being the smallest that mainstream brands use, chopping off the Function row, 10-key area, and even the arrow keys (which have to be accessed via a Fn button). A few designs go even larger than the full layout, with an extra column or two of programmable keys for custom bindings or macros. Which one you want comes down to a matter of available space and, perhaps more pertinently, taste.

These general layouts shouldn’t be confused with country- and region-specific key layouts, like ANSI and ISO. Most popular designs are available in at least those two variants.

Even budget gaming keyboards come with LED backlights these days, though they might not be the full programable, device-synced light show that companies like Razer and Corsair delight in. Unless you’re constantly playing in the dark and you can’t touch-type, it’s entirely cosmetic. It’s fun, that’s about it.

Keyboard makers are forever trying to one-up each other with extra features. For a mechanical board you can generally expect a removable USB cable (maybe a braided one for nicer boards), and possibly an included keycap puller and wrist rest. Larger boards usually include dedicated media controls, and the nicer ones get a fully programmable wheel or knob. An especially nice option is on-device memory, allowing you to keep key layout programs without running a driver program on each new computer.