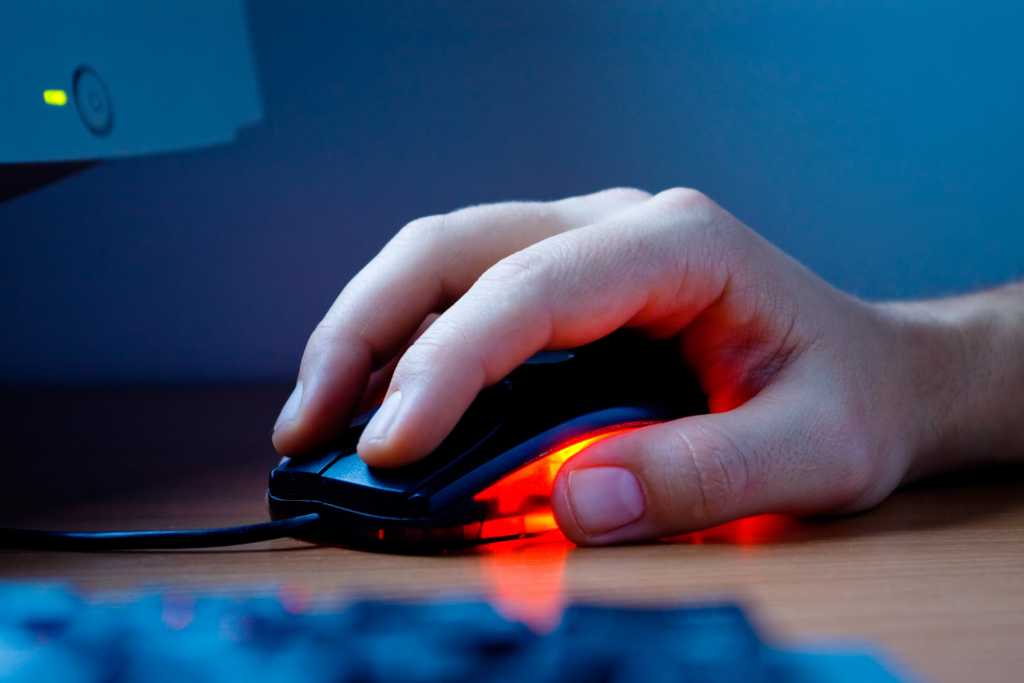 When your K/D tally is at stake it’s pretty tempting to buy a premium gaming mouse with all the latest bells and whistles. But that can be a costly move that can see you paying upwards of $150 USD—that’s coin that could go towards a brand-new processor instead.

The truth is you won’t lose much performance going for a cheaper option. In fact, you can get a top-performing mouse that—barring the sensor, which is usually more modest than in premium devices —is virtually identical in build quality and styling and with equally quick buttons.

That’s not to say all budget gaming mice are alike. Admittedly, at the lower end of the market there tends to be more variation in the build quality, weight, and button configuration than at the top end, so you’ll still want to do your homework before you buy.

Or, you could just peruse our list of best budget gaming mice (below). We’ve already done the research on your behalf by extensively testing a cohort of mice, sorting the wheat from the chaff, so that what’s left is the best of the best. We’ll keep updating our chart as we review more mice and find even better products.

For the criteria we use to review budget gaming mice and some useful buying advice, read our postscript explainer below. For even more options, see our complete roundup of the best gaming mice, featuring both wired and wireless picks at various prices points. 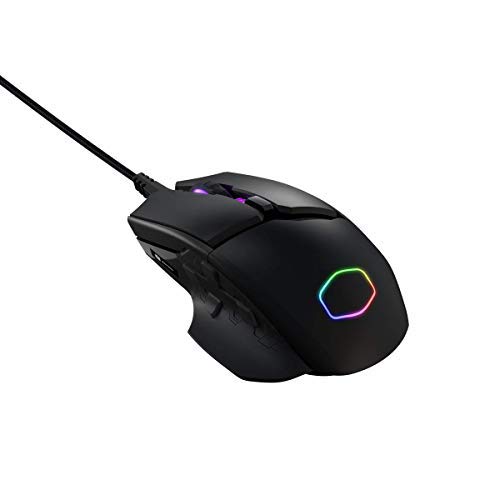 The MM830 rocks unique features that you won’t find in rival gaming mice, including a left-side D-pad (direction pad) and a tiny OLED screen that displays your computer’s system stats like RAM, CPU, and GPU usage. Nevertheless, it’s the more basic features that make it such a prize for gamers on a budget.

Those include an extremely comfortable right-hand scoop and thumb rest, impressive 24,000 DPI sensor, and an elegant and understated hexagonal RGB logo located on the mouse’s back. It’s a wired mouse so it’s not as portable as some. Regardless, it has just about everything else you’d want in a gaming mouse, and at a budget-friendly price. 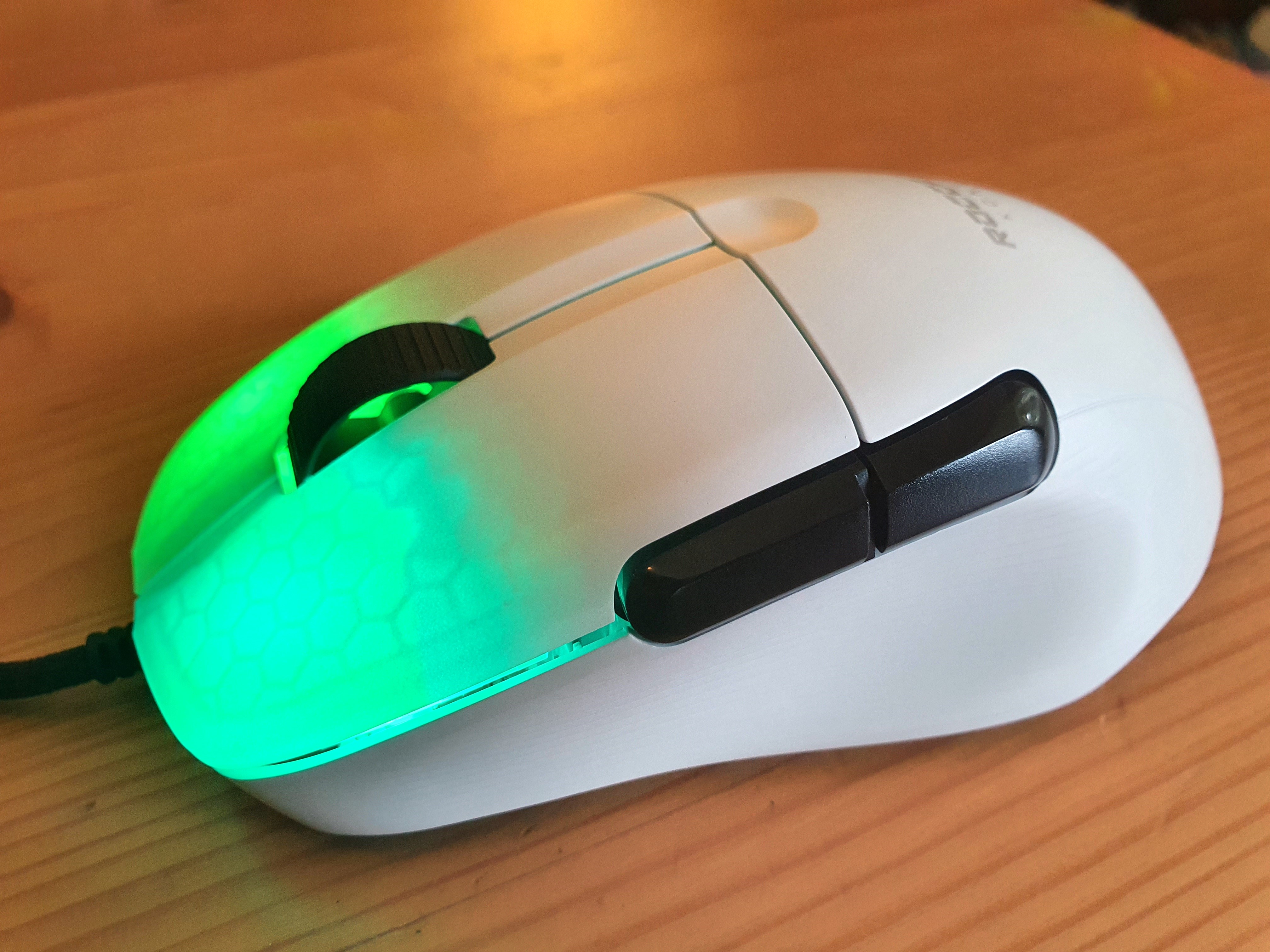 The wired Roccat Kone Pro is designed for precise targeting thanks to its lightweight design and formidable 19,000 Owl-Eye DPI sensor, which in our playtesting proved an excellent performer in fast-paced FPS games. Clicks are also extremely quick thanks to Titan optical switches in the buttons and a slight left-to-right slant on top that perfectly poises your index finger on the left main button ready to fire.

A thin plastic outer layer keeps the Kone Pro’s weight down to just 66 grams, so that it glides across your mouse mat smoothly and with minimal effort. While the Kone Pro doesn’t have a dedicated DPI button, you can still change DPI on the fly in games by assigning this function to one of its other buttons in the supporting Roccat Swarm software app. 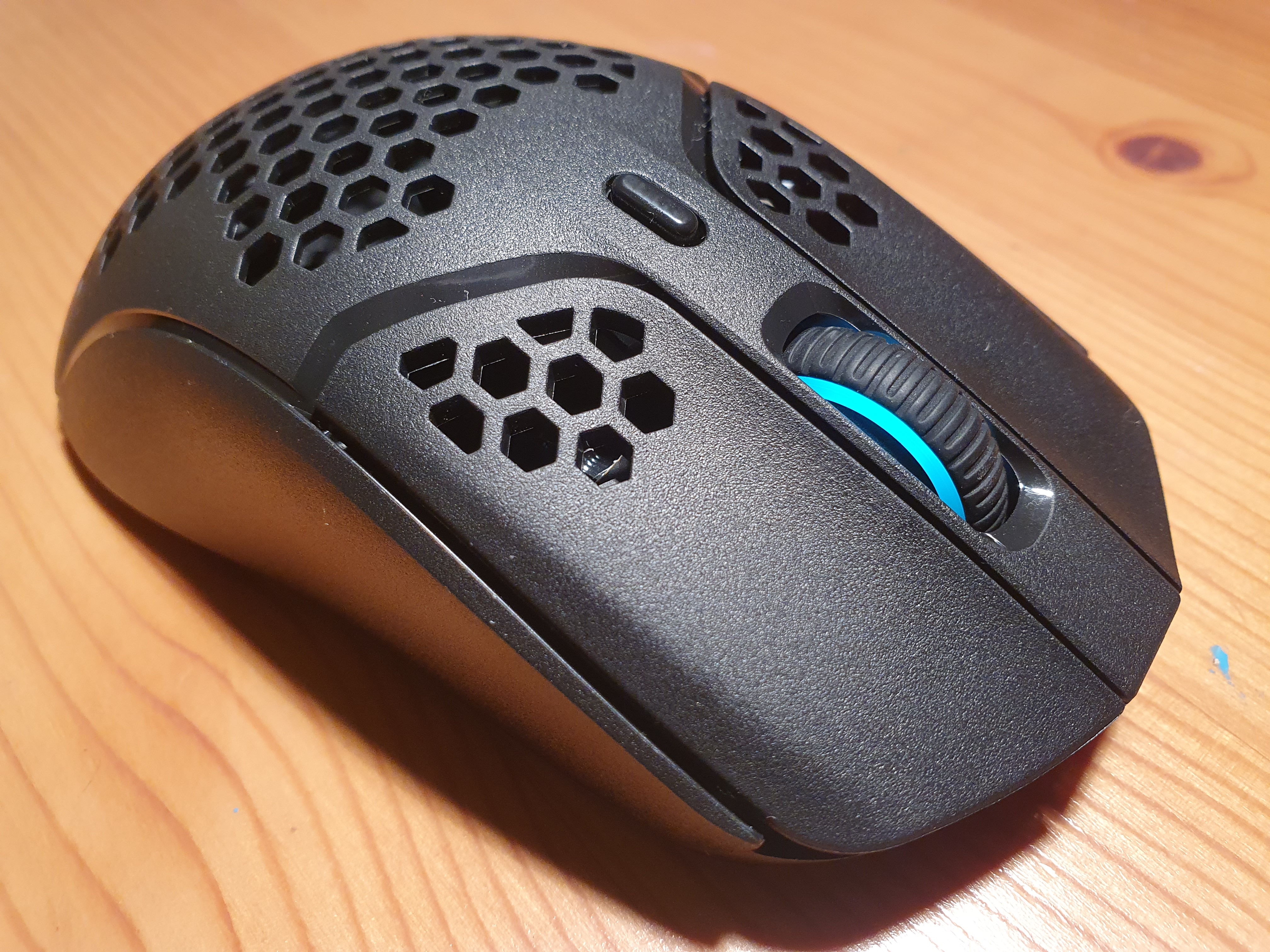 The HyperX Pulsefire Haste Wireless is built on the back of its wired counterpart’s esports pedigree so it’s ideal for competitive gaming, but with the bonus of being tether-free and portable. It sports an efficient six-button, ambidextrous design and powerful 16,000 DPI sensor. In our review we found the Pulsefire Haste Wireless’s sensor suitable for first-person shooters where it proved highly accurate for crosshair aiming when the DPI setting was set to low.

The Pulsefire Haste Wireless is also exceptionally stylish, with internal RGB lighting that lights up its futuristic honeycomb body like a firecracker. The perforated back also provides plenty of airflow, keeping your hand cool even during long gaming sessions.

The G203 proves gaming on a budget needn’t be glum, combining style, performance, and comfort for a shoestring price. This wired mouse sports a small ambidextrous body and familiar six-button configuration that resembles premium esports mice, except it has a more rounded back end that gives palm grippers a high level of precision.

In terms of hardware performance, the G203’s buttons feel quick and clicky. Its 8,000 DPI proprietary gaming sensor may not be as quick as some rival sensors, but it’s still highly accurate and performs decently in just about every casual gaming scenario.

In our review, we heaped praise on the G203 for its dazzling RGB lighting band and Logitech logo that light up your mouse pad with pops of color, the band of which also splits into three lighting zones customizable in the Logitech G Hub app. 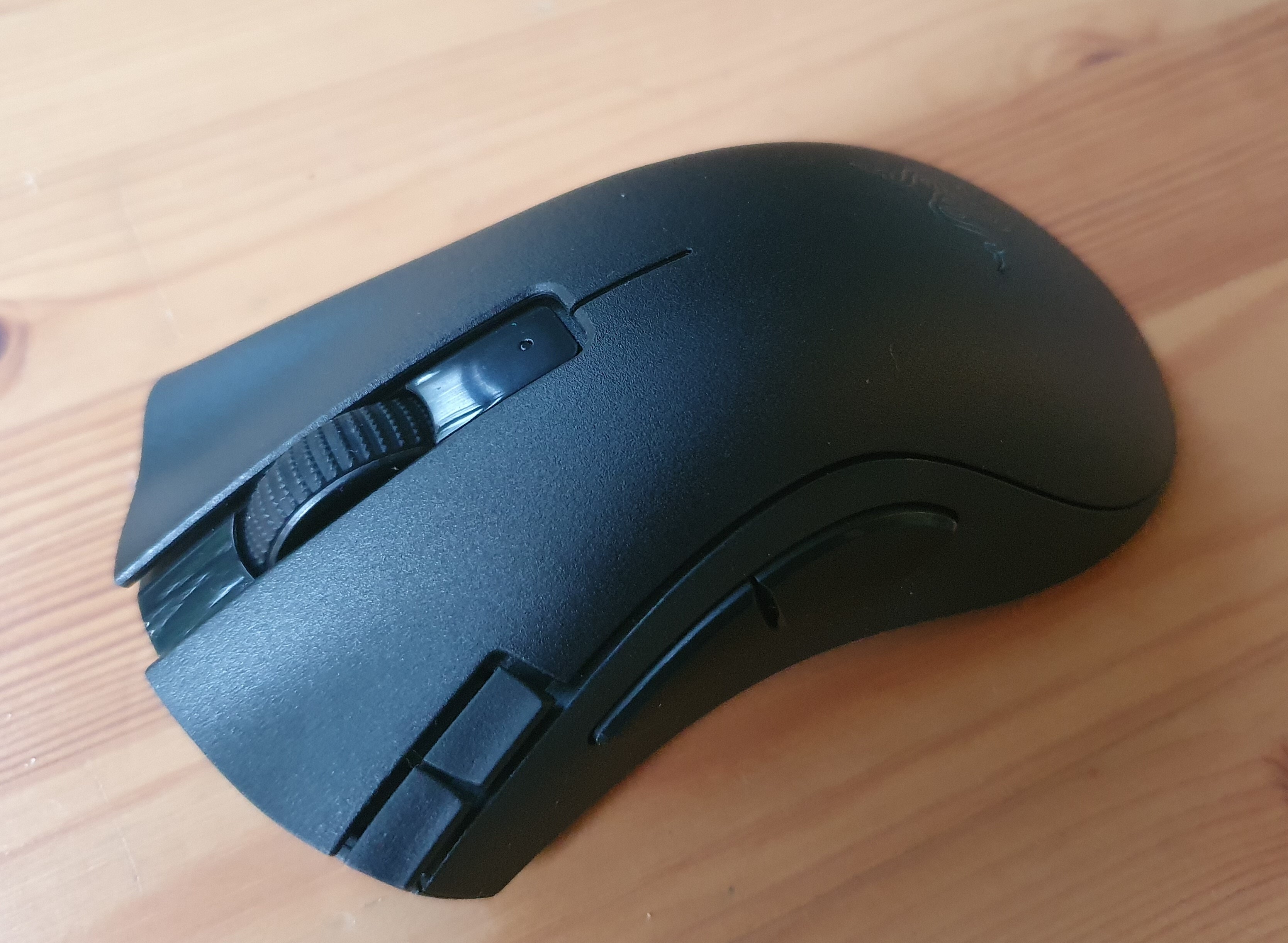 A stealthy profile is this wireless mouse’s biggest advantage—it sports an entirely matte-black body with no RGB lighting, meaning your work colleagues will be none the wiser about the gaming power that rests beneath your palm.

The V2 X Hyperspeed offers the convenience of dual wireless connectivity, allowing you to switch between 2.4GHz Wi-Fi and Bluetooth with the flick of a button. It’s also highly portable thanks to a long battery life, which provides approximately 235 hours in Wi-Fi mode and up to 615 hours in Bluetooth mode on a single AA battery. 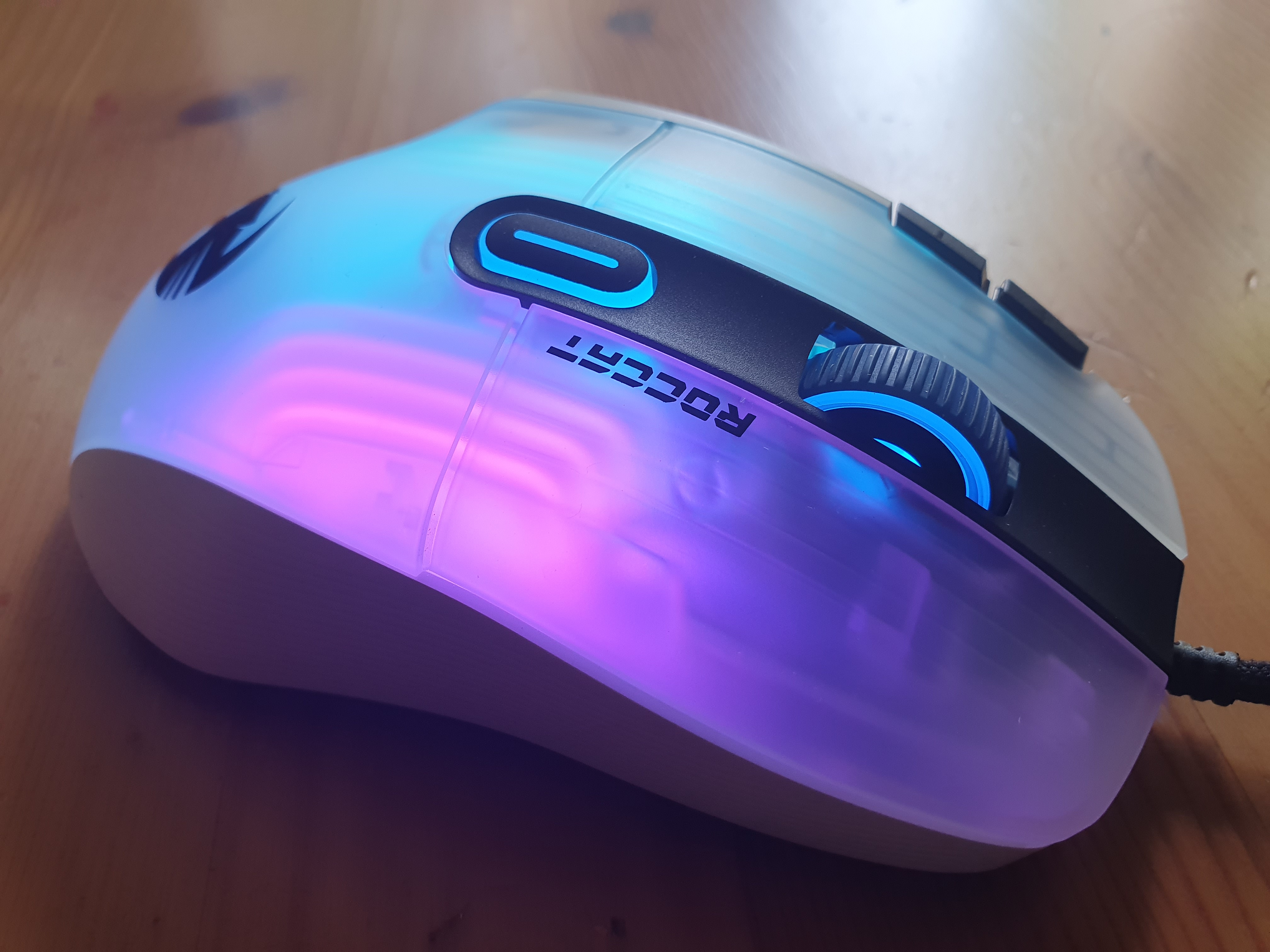 The Kone XP is the flashiest mouse we’ve had the pleasure of testing, featuring no less than eight customizable RGB “pipelines” illuminated by 22 LED lights, yet it’s also a solid performer. With an impressive contingent of 15 buttons—customizable to 29 functions—the Kone XP is especially suited for MMO, RPG, and RTS games that require players to quickly deploy a high number of commands or macros.

Under the hood, the Kone XP sports a 19,000 DPI Owl-Eye sensor based on the flawless PixArt PMW3370, which has proven its worth among competitive gamers.

In our PCWorld review we found it to be precise and accurate in games like Cyberpunk 2077. We also liked the Kone XP’s four-directional scroll wheel, which felt sturdy and responsive. 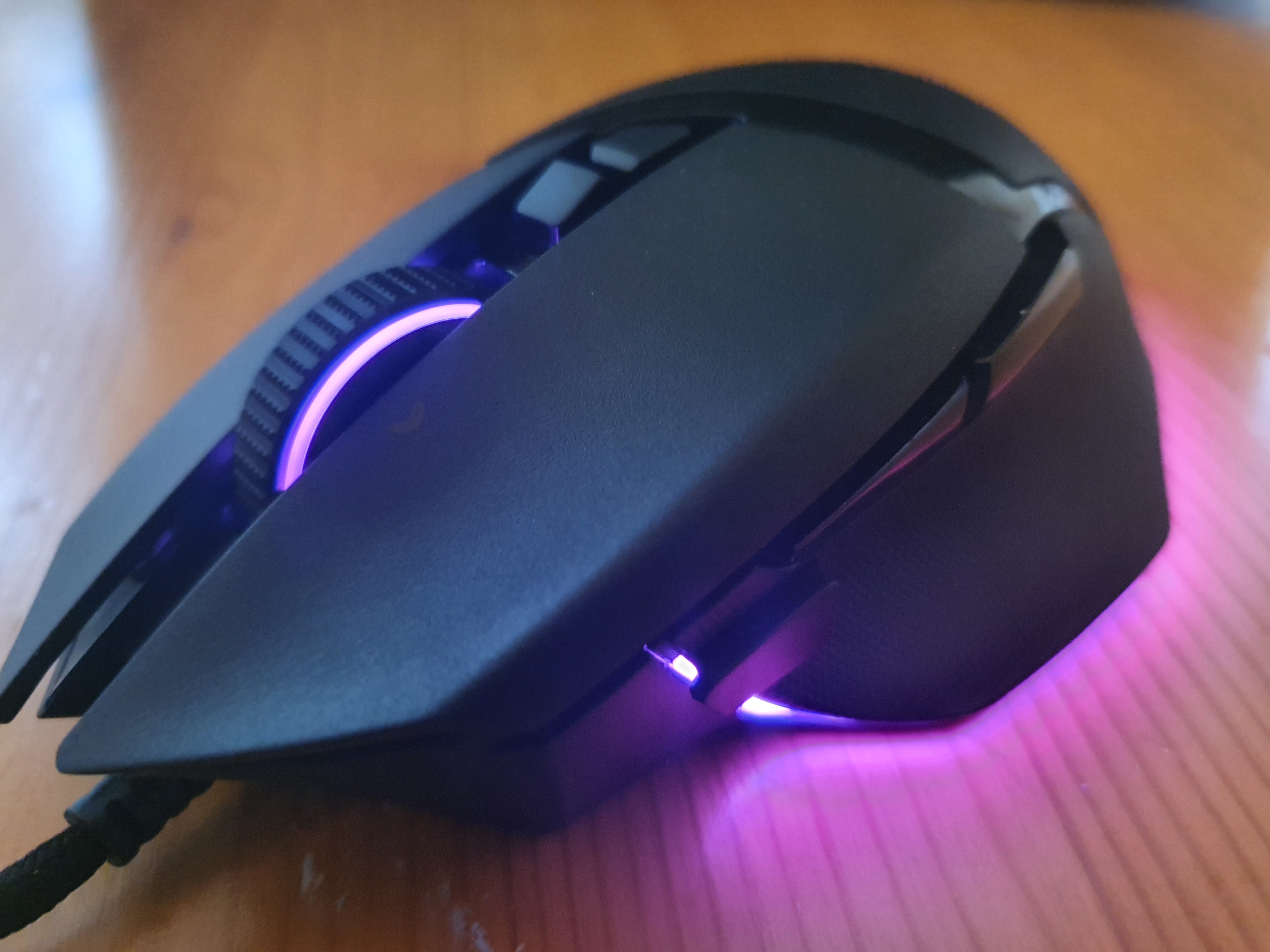 Thanks to its extremely comfortable design, this right-handed mouse is a pleasure to use for extended gaming periods. Among the features that make it so comfy are an ergonomic thumb rest that elevates your thumb off the surface you’re playing on, two highly tactile injection-molded grips on either side, and 11 well-placed, easy-to-reach buttons.

The Razer Basilisk V3’s hardware also performs handsomely. In our review we thought its 24,000 DPI sensor tracked flawlessly, and the buttons, which feature second-generation Razer Optical Switches, responded very quickly. The Basilisk V3 also has one of the best scroll wheels of any budget mouse we’ve come across, allowing you to switch between additional scroll modes, including a Free-Spin Mode and Tactile mode with the touch of a button.

What to look for in a budget gaming mouse

How much should I spend?

When it comes to what you should pay, there’s really no one price that fits every gamer. Although, as a general guide, you shouldn’t pay more than $90 for a budget gaming mouse—that being the absolute maximum cost of the most feature-stacked budget gaming mice you can get.

Traditional wired gaming mice with six-button configurations tend to be some of the most affordable these days, with excellent value-for-money options like the Logitech G203 LightSync, providing gamers with just about everything they’d want for casual gaming for around $40. Expect to pay a little more for a wireless mouse, such as the $60 USD HyperX Pulsefire Haste, whose tetherless design makes it a much more portable device.

What shape mouse do I need?

Many budget gaming mice share the same design as their premium counterparts, so chances are you may already be familiar with a design you like that feels comfortable. If you’re starting from scratch, first off you’ll want to find a mouse with a shape that fits your dominant gaming hand. There are three main shapes: left-handed, right-handed, and ambidextrous.

Left and right-handed mice are just what their names suggest—mice designed to accommodate left or right hands. These mice come with design characteristics that provide advantages to left- or right-handed users, including curves to follow the contours of their hands and button configurations that can be more easily reached.

Alternatively, ambidextrous mice are designed to be used by either hand. These mice sport a more neutral shape, which is usually quite symmetrical. Ambidextrous mice are quite often favored by competitive gamers who like the predictable way they move

What size mouse is right for me?

Just like a new pair of sneakers, you’re going to be spending a lot of time with your gaming mouse, so if it’s a lousy fit you’re not going to be comfortable and that’s going to affect your performance. Mice tend to fit into three main size categories, small, medium, and large. To find a mouse that best fits your hand size you can use this simple size guide:

What mouse suits my grip style?

The way you hold your mouse should fit into one of three main grip styles: a palm grip, claw grip, or fingertip grip. While you can essentially ignore your grip style altogether and play with any gaming mouse you choose, if you’re looking to maximize performance, you’ll want a mouse that gives you the most control for your grip. Here’s a guide for what to look for:

How many buttons do I need?

Your mouse’s button count will limit the number of commands and macros you can apply in game, and it can also affect the mouse’s weight, which can ultimately impact gaming performance.

Ideally, the number of buttons you need should be informed by the types of games you like to play. For example, if you play a lot of first-person shooters, then keeping your mouse’s weight to an absolute minimum with a small button count is of paramount importance. In this case a standard six-button mouse is perfect, providing enough functionality for at least six commands, but optimizing weight for movement and targeting.

On the other hand, if you predominately play role-playing games (RPGs), or massively multiplayer online games (MMOs), a mouse with from 10 to 18 buttons is preferable since you’ll have more options for the myriad commands these games require. These days you can also get mice like the Roccat Kone XP that allow you to customize buttons with extra functions, which greatly increases the number of commands you can deploy.

What DPI sensor should I look for?

When it comes to performance a lot of emphasis is placed on the DPI (dots per inch) resolution of a gaming mouse’s sensor, with manufacturers touting the benefits of top-of-the-line mice with sensors between 20,000 to 30,000 DPI.

With some exceptions, budget gaming mice tend to have sensors that are much lower in DPI resolution than premium models, which by the same thinking should mean they’re a lot less capable. But that’s simply not the case. In fact, budget gaming mice with sensors as low as 8,000 to 12,000 DPI can still track movement faster than what the human eye can perceive, and, with the exception of some competitive gaming scenarios, can be just as capable performers.

The takeaway is, while it doesn’t hurt to purchase a mouse with the highest DPI sensor as your budget will allow, you should also place just as much importance on other factors like the mouse’s weight and its button configuration, which can be just as important as your mouse’s sensor when it comes to performance.

How light should my mouse be?

Weight comes down to personal preference. Some gamers (especially those that play FPS games) swear by lightweight mice for quicker movement and aiming and to prevent soreness in long gaming sessions, while others prefer the consistent feeling of a heavier mouse.

That said, manufacturers continue to make lighter mice each year. This year we’ve seen a bucket load of new releases that weigh much less than their predecessors—some six-button mice are even breaking the previously unheard of 60-gram mark.

You may find it difficult to find a budget mouse that light, since the lightest mice usually carry the most premium price tags. A more realistic weight is anything below 100 grams, it being kind of an unspoken benchmark for optimal mouse weight among serious gamers.