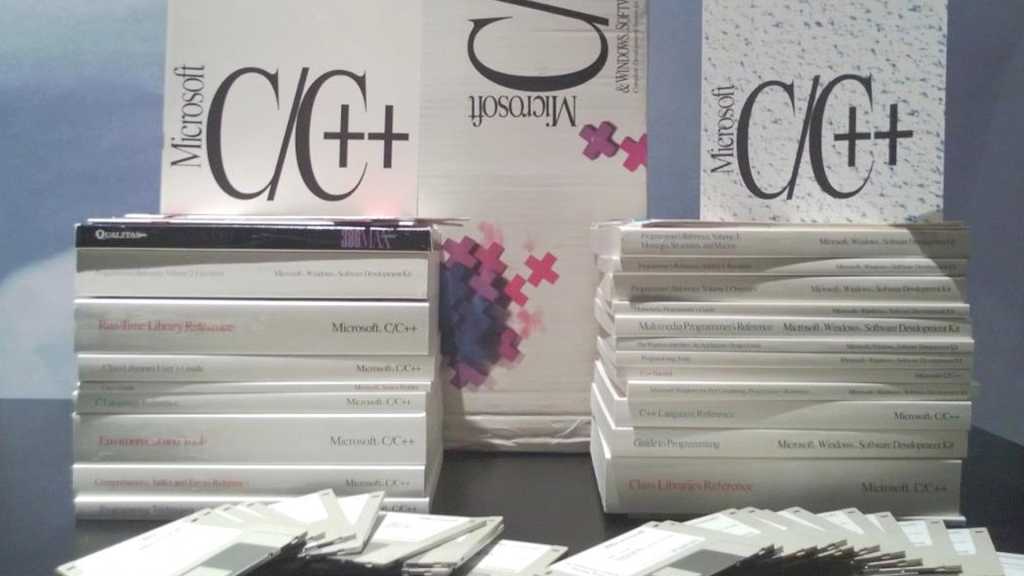 Today you can get everything from the latest operating system to a 150GB PC game over an internet connection, if you’re willing to wait long enough. But in the days when internet speeds were measured in kilobytes per second, snail mail and retail shelves were still the only real way to get any complex piece of software. Thirty years ago, Microsoft had its “biggest” software release ever, at least in terms of dimension and mass.

As noted by Microsoft’s official archivist Amy Stevenson, the physically “biggest” product the company ever made was the C/C++ Compiler version 7.0. Thanks to a bundled-in Windows SDK, it allowed developers to create applications for Windows, DOS, and OS/2, all in the same box. And what a box: in addition to 25 separate 5.25-inch floppy disks holding the programs themselves, the documentation came in 21 published paper booklets that made up most of the package’s weight and space.

The presentation box was over two feet long, weighing over 40 pounds (some sources say up to 44 pounds, just shy of 20 kilograms). These days it’s hard to imagine a piece of software that requires you to lift with your legs, unless you count the more elaborate video game special editions with statues and other props. “We never did that again,” said Stevenson. According to former Windows and Office chief Steven Sinofsky, the massive documentation was a reaction to negative reviews of the C/C++ compiler 6.0, which moved some of the documentation online.

The C/C++ Compiler was replaced by Visual C++ 1.0 in 1993, which would be offered on 3.5-inch floppy disks and the vastly more convenient CD-ROM format. According to classic collector listings, the floppy version (plus documentation) was “only” 33 pounds.

Visual C++ continues in development to this day. But software packages became more and more compact as physical media became more dense, shifting to DVDs and flash drives, generally including digital copies of the documentation instead of expensive printed books. Today digital downloads are the primary vector for software sales of all kinds, and indeed, the latest versions of Visual Studio and Visual Studio Code are only available as downloads.