But that’s what you get when you build a GPU with billions of transitors, two thousand five hundred and sixty CUDA cores and 8GB of GDDR5X RAM. Even better, you can overclock the nuts off of it without heating up your entire house.

Too technical? Just say its frickin’ fast. It’s 60 percent to 70 percent faster than a GTX 980 in most games we’ve tried. And in VR, Nvidia claims a single GTX 1080 card outperforms two GTX 980 cards in SLI.
It basically makes all cards that have come before look like chumps. GTX 980. Overboard. GTX 980 Ti. Cut. Titan X? Get your thousand dollar ass out of here.

Despite the huge performance difference the GTX 1080 can run on the same 500 watt PSU over its predecessor.

Still, if you absolutely, positively must have the most bad-ass GPU on the planet today, the only answer is the GeForce GTX 1080.
Hide transcript
Hide credits
More Hardcore Hardware

Hardcore Hardware
You can take your gaming with you with MSI's GS63VR Stealth (2:20) 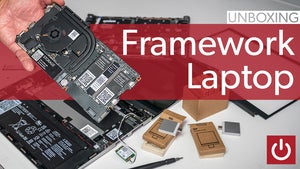